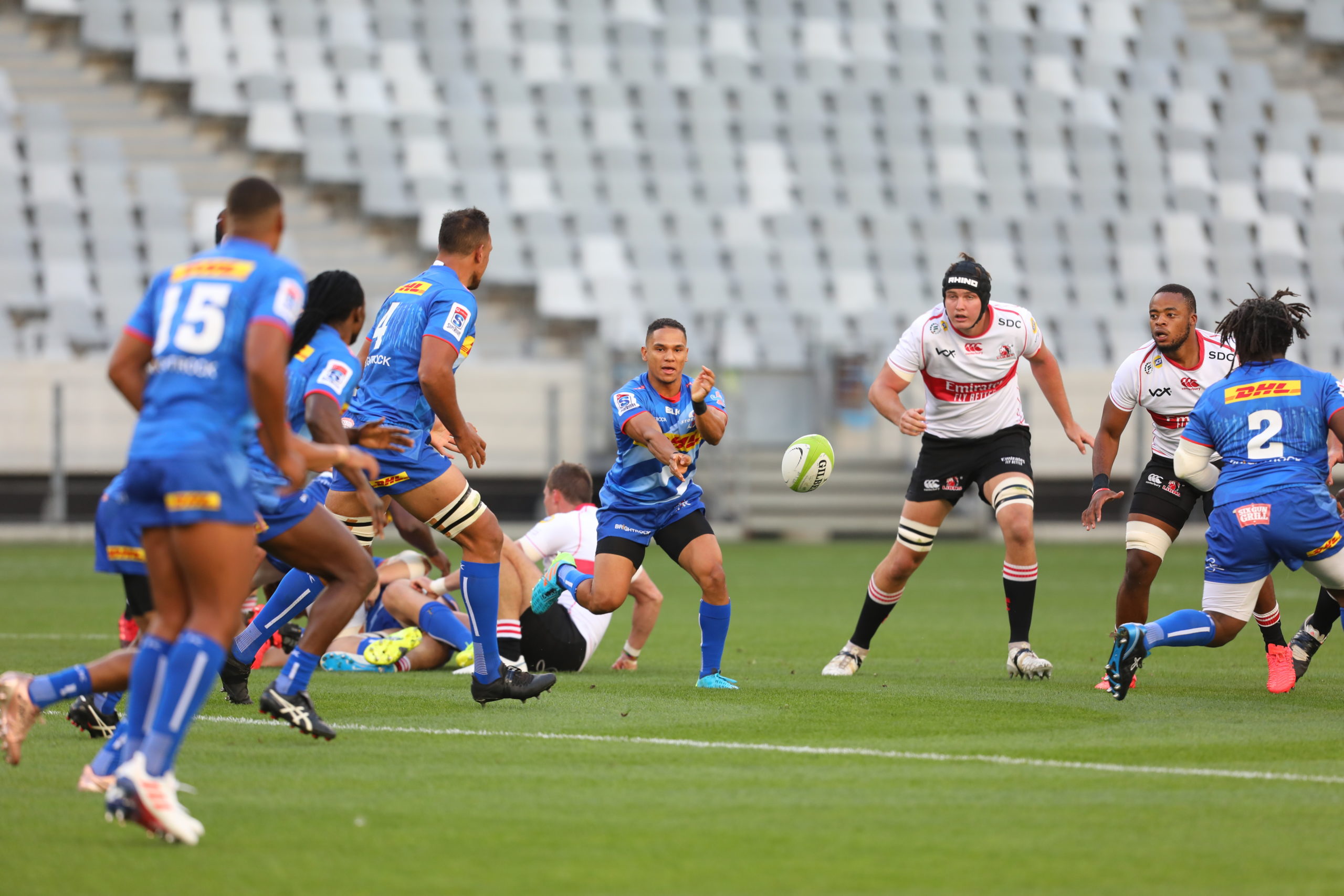 
The DHL Stormers are up against the Emirates Lions in Johannesburg as both teams look for their first win of the PRO14 Rainbow Cup SA. Follow all of the action live here with us.

Blue skies and great conditions for rugby in Joburg today, so we should be set for a top game.

0 – Kick-off under blue skies in perfect conditions for rugby at Emirates Airline Park in Joburg where the DHL Stormers are up against the Emirates Lions in a PRO14 Rainbow Cup SA encounter.

3- – DHL Stormers with all the ball in the early exchanges as they take the game to the Lions. A big hit out wide knocks the ball loose so the Lions have the first scrum.

5 – Breakdown penalty won by Sergeal Petersen and Abner van Reenen kicks the penalty to put the DHL Stormers 3-0 up.

8 – Lions win a breakdown penalty and set up a maul, but good defence from the DHL Stormers as they win it back and clear it.

10 – DHL Stormers go early on defence and blown up for offside so Hendrikse kicks a penalty to level it up at 3-3.

13 – The DHL Stormers turn it over in the 22 again and they go wide, but it is intercepted by Wandisile Simelane who scores to put the Lions up 10-3.

16 – Interception from Herschel Jantjies this time, he is brought down in the 22 and it is a high tackle so the DHL Stormers have an attacking opportunity.

18 – The forwards take it up before it goes wide to the backline. They are bashing away at the tryline and it goes out to Dan du Plessis who glides through a gap to score and reduce Lions’ lead to 10-8.

22 – Lions come from their own half, the ball bounces perfectly from a chip kick and flank MJ Pelser scores to take their lead out to 17-8.

25 – Lions win a scrum penalty on halfway and Hendrikse has a shot at goal but puts it wide.

28 – DHL Stormers on the front foot and the Lions are blown up at the breakdown. It is kicked into the corner and they maul, but the Lions give away another penalty just short of the line.

31 – Another maul and this time there is no stopping Bongi Mbonambi as he peels off and powers over to score. That cuts the Lions’ lead to 17-15.

35 – Big kick into the in-goal from EW Viljoen and the goal-line drop-out means that the Lions can attack. An attacking kick goes out and the DHL Stormers make ground from a maul from the line-out.

38 – A contestable kick bounces up for the Emirates Lions and they go wide to EW Viljoen who scores in the corner to take their lead out to 22-15.

40 – Half-time in Joburg and the Lions take a seven-point lead into the break.

42 – The DHL Stormers kick it into the corner and maul. It goes to the backline and the ball is picked up by Marcel Theunissen who runs a great angle to score and level it up at 22-22.

45 – Lions on the attack with a line-out in the 22, but the DHL Stormers get up to steal and clear it.

49 – Tim Swiel is on for Abner van Reenen and he fubles a pass so Lions win a penalty and kick into the corner.

52 – Lions bash away and eventually scrumhalf Andre Warner scores to give them a 29-22 lead.

55 – A whole new front row for the DHL Stormers. The coutner-attack in on out wide, but a poor pass means that it is knocked on and the Lions have a scrum on halfway.

57 – Scrum penalty and an attacking line-out for the Lions. They get it over the line, but it is lost forward.

60 – The Emirates Lions kick a contestable and Damian Willemse handles it, releasing Edwill van der Merwe for the wing to step inside and step on the gas. He scores to level the scores again at 29-29. Hold on tight for the last 20 mins.

63 – DHL Stormers win a scrum penalty this time and they have a chance to ttack again from the line-out.

65 – DHL Stormers with all the possession as they take the game to the Lions and probe the defence. A few gaps open up but a pass goes into touch.

69 – Evan Roos wins a turnover, but he did not release in the tackle, so the Lions kick a penalty to take a three-point lead at 32-29.

74 – Lions with a scrum in their 22 and they go to the blindside with Rabs Maxwane scoring in the corner to take the lead out to 37-29.

77 – The DHL Stormers refuse to give in and come from their own 22 to score agin, with Dan du Plessis finishing it off for his second after important contributions from Van der Merwe and Johan du Toit. Just one point in it as the DHL Stormers push for a fairytale finish.

80 – A fairytale finish for the DHL Stormers in Joburg as Tim Swiel nails a penalty after the hooter to give them a remarkable 39-37 win against the Emirates Lions. They never gave up and got the ultimate reward!