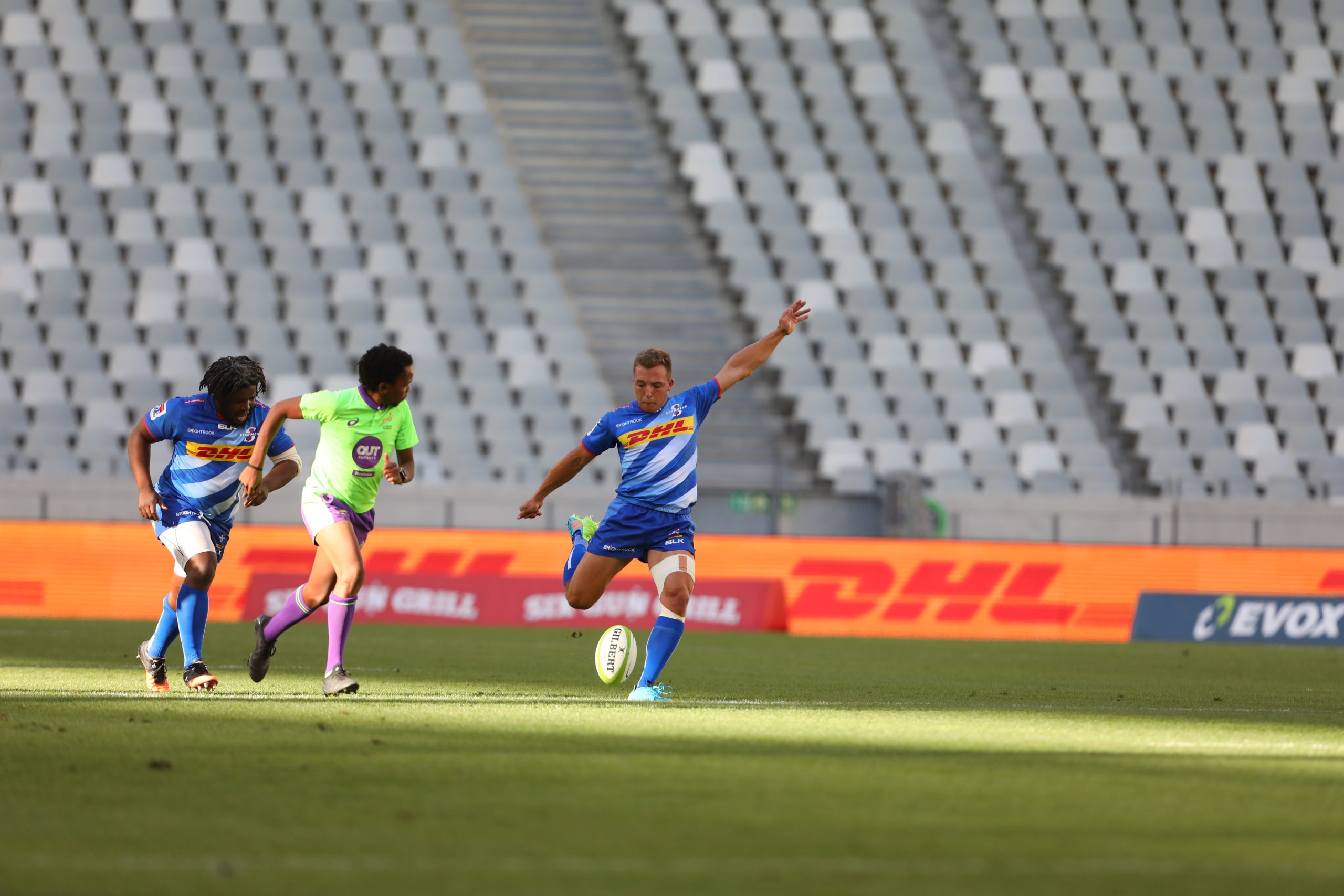 Tighthead prop Sazi Sandi has been ruled out and his place in the starting line-up is taken by Lee-Marvin Mazibuko.

0 – Kick-off in perfect conditions in Pretoria. Some early kicking from both teams as they look for territory.

5 – Both teams get an early scrum and the Bulls make good use of it to put fullback Richard Kriel over for the first try to put them 7-0 up.

10 – Both teams enjoy possession in midfield without finding a way through. The Bulls lose it forward so the DHL Stormers have a scrum near halfway. Solid scrum and it goes to Willemse who finds a good touch in the 22.

14 – The ball is kicked out by the Bulls and Augustus takes it up the middle and wins a penalty. Wolhuter kicks it into the corner and the forwards maul with advantage.

16 – Another maul, another side entry from the Bulls. It goes into the corner again but the line-out is missed so the Bulls can clear it.

18 – Kick over the top from Wolhuter and the Bulls wing puts a foot on the line so the DHL Stormers can attack again from a line-out on the 22. It goes wide to Willemse and he is brought down and loses it forward so the Bulls have a defensive scrum this time.

20 – DHL Stormers playing all the rugby in opposition territory. Hands on the ball and building phases with some nice touches from forwards and backs. Offside so Wolhuter kicks the penalty to make it 7-3.

24 – Slick backline move from an attacking line-out as the DHL Stormers go wide and Leolin Zas steps then fends to go over for the try. That puts DHL Stormers 10-7.

26 – A high tackle from Nizaam Carr and DHL Stormers have another attacking line-out. Willemse puts a great rolling grubber into touch in the corner.

28 – Bulls scramble the ball into touch and the DHL Stormers come again with Rikus Pretorius carrying it up the middle but the ball is lost forward at the breakdown.

30 DHL Stormers still bossing territory in Pretoria. Big shove from the forwards and they are rewarded with a scrum penalty. Wolhuter kicks it over to take the lead out to 13-7.

35 – Penalty advantage from the maul so they go wide and the backs come up with a beauty. Rikus Pretorius bursts down the wing and finds Zas in support to go over for his second try. That takes the lead out to 20-7.

40 – The home side come up with a maul try on the stroke of half-time, but the DHL Stormers take a 20-14 lead into the break after a first half which saw them play most of the rugby at Loftus Versfeld.

42 – Bulls wing Marco Jansen van Vuuren scores early in the second half to reduce the DHL Stormers’ lead to 20-19.

45 – The Vodacom Bulls go offside so Kade Wolhuter slots another penalty. That is four from four from the young flyhalf tonight. DHL Stormers lead goes out to 23-19.

55 – The replacements come on from both sides, but no way through the defences.

60 – The Bulls hammer away at the tryline, but it is lost forward and the DHL Stormers can clear. Edwill van der Merwe breaks out and takes it into the 22 but the Bulls scramble back, this is end to end stuff.

65 – DHL Stormers on the attack again, but a small knock-on means the Bulls get a scrum in their own half. Huge shove from the forwards so Tim Swiel takes aim at the poles and slots the penalty to take the lead out to 26-19.

69 – The Bulls have an attacking maul and lock Ruan Nortje forces his way over for the try. Morne Steyn misses the conversion so the DHL Stormers lead 26-24.

72 – Ruhan Nel is shown a yellow card for a deliberate knock-down and the Vodacom Bulls are awarded a penalty try by the TMO. That puts the home side 31-26 ahead.

76 – The penalties against the DHL Stormers keep coming and Morne Steyn kicks another three points after a tackle from Zas is called dangerous. That takes Vodacom Bulls lead out to 34-26.

78 – The DHL Stormers scrum wins another penalty and Swiel kicks for the corner as they look for another try to end the game. A yellow card for Nortje and Swiel knocks over the penalty to put the DHL Stormers back in range.

80 – Juanro Augustus is over the line for the winning try, but the ball is lost forward in the act of scoring and is disallowed by the TMO. The Bulls have claimed a 34-29 win.