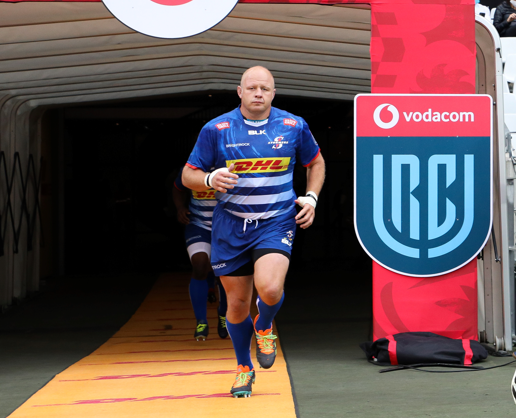 
Prop Brok Harris will run out first at DHL Stadium on Saturday as he brings up 100 games for the DHL Stormers in the Vodacom United Rugby Championship encounter with the Cell C Sharks.

Harris starts at tighthead prop in one of two changes to the starting line-up for the coastal clash, which kicks off at 17h05 on Saturday.

Having made his DHL Stormers debut back in 2007, Harris played 93 Vodacom Super Rugby games and also brought up a century of DHL Western Province caps, before leaving to join the Dragons in 2015.

Having played over 100 games for the Welsh side, Harris returned to South Africa and got involved as a scrum consultant with the DHL Stormers before being used as injury cover for the Vodacom United Rugby Championship campaign. He has played on both sides of the scrum for the DHL Stormers this season and will line up alongside captain Steven Kitshoff and hooker Scarra Ntubeni in a front row which boasts almost 300 DHL Stormers caps between them.

The only other change to the DHL Stormers starting line-up sees Warrick Gelant start at fullback, with Damian Willemse one of two backs on the replacements bench this week.

Utility forward Ben-Jason Dixon returns from injury and will make his first Vodacom United Rugby Championship appearance when he takes the field.

DHL Stormers Head Coach John Dobson paid tribute to Harris, who has always gone above and beyond the call of duty for his team.

“We brought Brok in as a scrum consultant this season, hoping to benefit from his knowledge of the Vodacom United Rugby Championship teams and conditions. His performances on the pitch have been remarkable and there is nobody who deserves this milestone more than him,” he said.

Dobson added that he is looking forward to seeing the impact that Gelant and Willemse can make at DHL Stadium, having switched roles this week.

“Warrick was always going to start this game as per our plan and having someone like Damian on the bench affords us the luxury of an extra forward replacement. Both of them are in incredible form and will play vital roles on Saturday.

“After starting the year with two away games, the team is keen to get out there in front of our Faithful supporters at DHL Stadium and deliver a worthy performance at home,” he added.