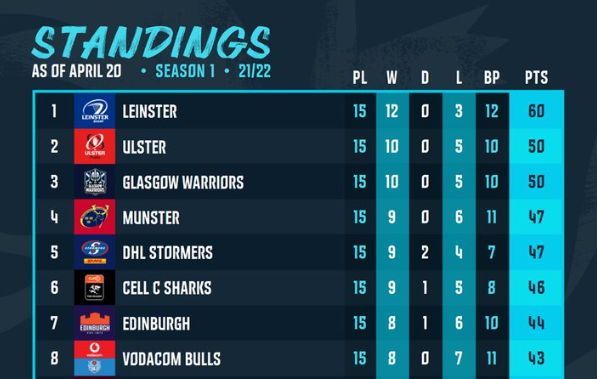 
With three games left in the regular season of the Vodacom United Rugby Championship, the DHL Stormers have a play-off place in their sights.

Thanks to a hot streak which has seen them win five consecutive games and their last six home games, the DHL Stormers find themselves top of the South African Shield and in fifth place on the overall standings.

They are level on log points with fourth-placed Munster and host third-placed Glasgow Warriors at DHL Stadium on Friday.

This means that if they continue their winning run, then a home quarterfinal is very much within their grasp.

A finish in the top eight of the competition would also see the DHL Stormers qualify for the European Champions Cup next season, so there is all to play for in these last three games.

Following their clash with Glasgow Warriors on Friday, the DHL Stormers then host the top-placed Leinster at DHL Stadium next Saturday before they take a two-week break and end the regular season with an away game against Welsh team the Scarlets.

A finish in the top four will see the DHL Stormers secure a home quarterfinal at DHL Stadium, which means that the next three games are crucial.

With the Faithful right behind them, the focus will be on continuing their impressive form at home, before finishing the regular season with one more away game in Wales.