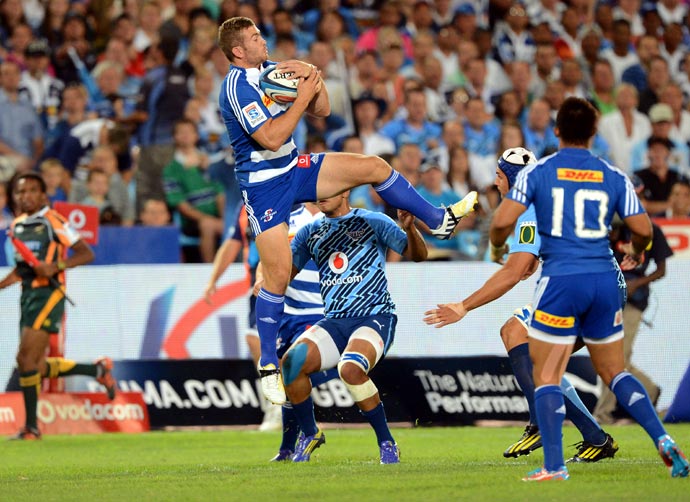 
The Vodacom Stormers have enjoyed exceptional support at their home ground in the 2008 Vodacom Super 14 and with many Capetonians kicking back this week due to a spate of public holidays, Saturday’s match against the Brumbies will be the perfect way to enjoy the long weekend!

Tickets for the match are on sale through Computicket, Shoprite Checkers, Checkers and Checkers Hyper Stores nationwide, despite public holidays. Tickets can also be purchased at the Newlands Box Office in Boundary Road on Friday 2 May from 8h30 to 16h30. The WP Rugby Shop will also be open on Friday.

Seating tickets are priced from R50 (Grand Stand Ramp Seating) to R85, with standing room priced at R40. The Newlands Box Office will also be open on Saturday from 09h00 till kick-off.

Newlands will have a festival of rugby on show, with Varsity Cup winners Maties facing Hamiltons in a top of the log Club Rugby fixture at 11h45. Hamiltons are a formidable side this season, acquiring the services of some former professionals in Johan Ackerman and Egon Seconds. Captain Jaco Gouws is also an experienced campaigner having played most of his provincial rugby for SWD and the Sharks. Newlands won’t be unfamiliar territory to the bullish No. 8, having made 4 appearances for the Stormers in 2003.

The club rugby fixture will be followed by an exciting Vodacom Cup semi final match between the Blue and White Hoops of WP and the Vodacom Free State Cheetahs. The two teams finished first and second on the South Section log of the Vodacom Cup and it is expected to be a tough tussle for the final berth.

Vodacom WP have been consistent throughout the competition and have built a solid game plan that utilizes quick and wide attack coupled with well-organized defence. Whilst they have lost the services of Wylie Human and Pieter Myburgh to the Vodacom Stormers, there is no doubt that the backline of Hayden Groepes, Terry Jacobs (pictured), Zhahier Ryland, Morgan Newman, PJ Vermeulen, Isma-eel Dollie and Alistair Siegelaar will be a test for the Free State defence. Free State play a high risk, quick passing and running game that has paid dividends but also saw them suffer heavy losses against Griquas and the Blue Bulls during the final weeks of league matches.

Vodacom WP enter unchartered territory with their predecessors only having reached this stage of the competition on three previous occasions. They have never won a Vodacom Cup semi-final. Free State have been in four previous semi-finals, winning once in 2000.

Kick off for the Semi Final clash between Vodacom WP and the Vodacom Free State Cheetahs is set for 14h00. The Vodacom Stormers will face the Brumbies at 17h05.