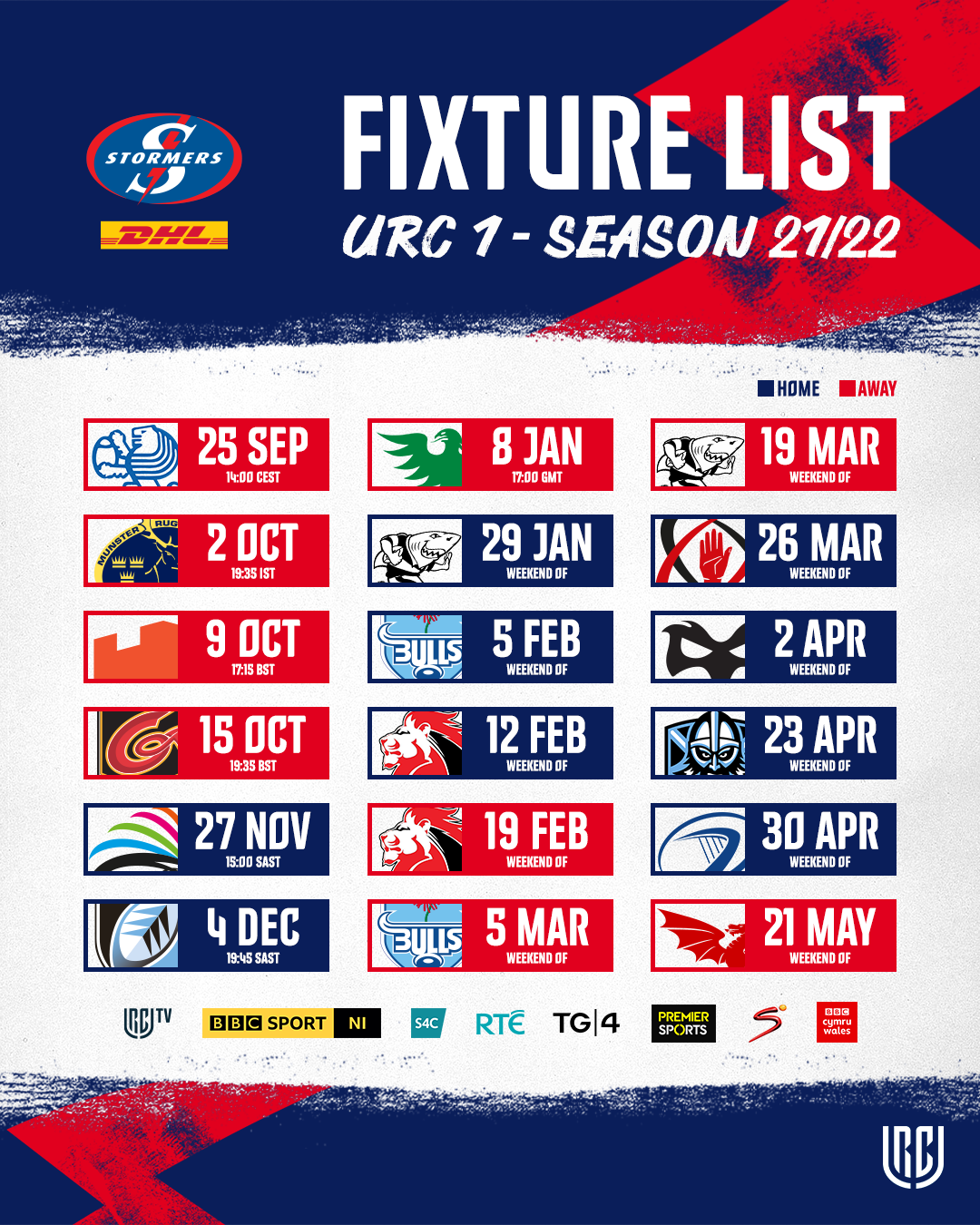 
After great anticipation the United Rugby Champinship has revealed all 144 regular season match-ups as South Africa’s top clubs take to the field against the Celtic and Italian nations in a global first for rugby.

The DHL Stormers will kick things off with a four-match European tour which will see them face Benetton, Munster, Edinburgh and Dragons on consecutive weekends from 26 September to 16 October.

Building upon rivalry created during the British & Irish Lions Series, the Cell C Sharks, DHL Stormers, Emirates Lions and Vodacom Bulls now take the pitch in iconic locations against the best of Ireland, Italy, Scotland and Wales across 18 rounds of action.

With every game live on TV, this new era will kick-off to the widest possible audience in the league’s history with major free-to-air audiences opened up in Ireland (RTÉ and TG4), Italy (to be confirmed shortly), and the UK (BBCNI, BBCW and S4C) as part of the URC’s new line-up of broadcast partners. They will line up alongside our long-term pay TV partners in Premier Sports and Supersport in order to deliver unprecedented access for fans and major exposure for athletes and clubs.

The unique appeal of the URC will be on show in the Round 1 where defending title holders and eight-times champions, Leinster, will play host to the three-time Super Rugby champions Vodacom Bulls. Munster, another multiple-time champion will welcome the Cell C Sharks to Ireland while the DHL Stormers face Rainbow Cup winners Benetton in Treviso and the Emirates Lions travel to Parma to take on Zebre.

Edinburgh will host Scarlets in their new stadium in the Scottish capital, the first Welsh derby of the season takes place between Dragons and Ospreys, Cardiff Rugby entertain Connacht while a battle of former champions will take place between Ulster and Glasgow Warriors.

Martin Anayi, United Rugby Championship CEO, said: “We believe these fixtures will ensure that the URC could deliver on its promise of a new era for our league where the very best from South Africa go head-to-head with our Celtic and Italian teams.
“As we carefully manoeuvre out of the pandemic, the URC will take its place as one of the leading leagues in global rugby and this fixture list should ignite our competition and take it to the next level.

“This schedule is the most complex we have ever produced and the efforts of every one of our stakeholders to help us piece it together in the current climate have been monumental. We now have a format that will heighten competition, showcase our clubs, elevate our athletes and bring great excitement to fans and TV audiences right across our territories and beyond.”

To accommodate the very latest travel conditions across the URC’s competing territories the provisional fixtures had to be readjusted. The South African teams will now complete four-week tours of Europe to begin the season giving fans in Ireland, Italy, Wales and Scotland an early opportunity to see these new sides in person.

In the URC’s commitment to avoid clashing with international weekends, the original date of Round 6 has been moved to the final week in November which ensures every round of the tournament is played on a standalone weekend.

Across the world, rugby fans will be able catch all the action on URC TV, the league’s own OTT player which will be launched in partnership with RTÉ very shortly.
Jeopardy and drama will be littered across the campaign with every team eligible to qualify for EPCR tournaments and the reduction in rounds from 21 to 18 means every match matters.

In the new format all 16 teams will be ranked across a single table which will reward the top eight teams with their places in an expanded Final Series that includes a full Quarterfinal stage, followed by Semifinals before the best two teams meet in the URC Grand Final in June.

Kick-off times and TV selections have been made up to Round 10 and the details for the remaining rounds will be finalised in the near future.

The South African derbies scheduled for R5, R8 and R9 will take place on the weekends of February 5, February 12 and March 19 respectively

The Quarterfinals, Semifinals and URC Grand Final will take place on consecutive weekends on June 4, June 11 and June 18.