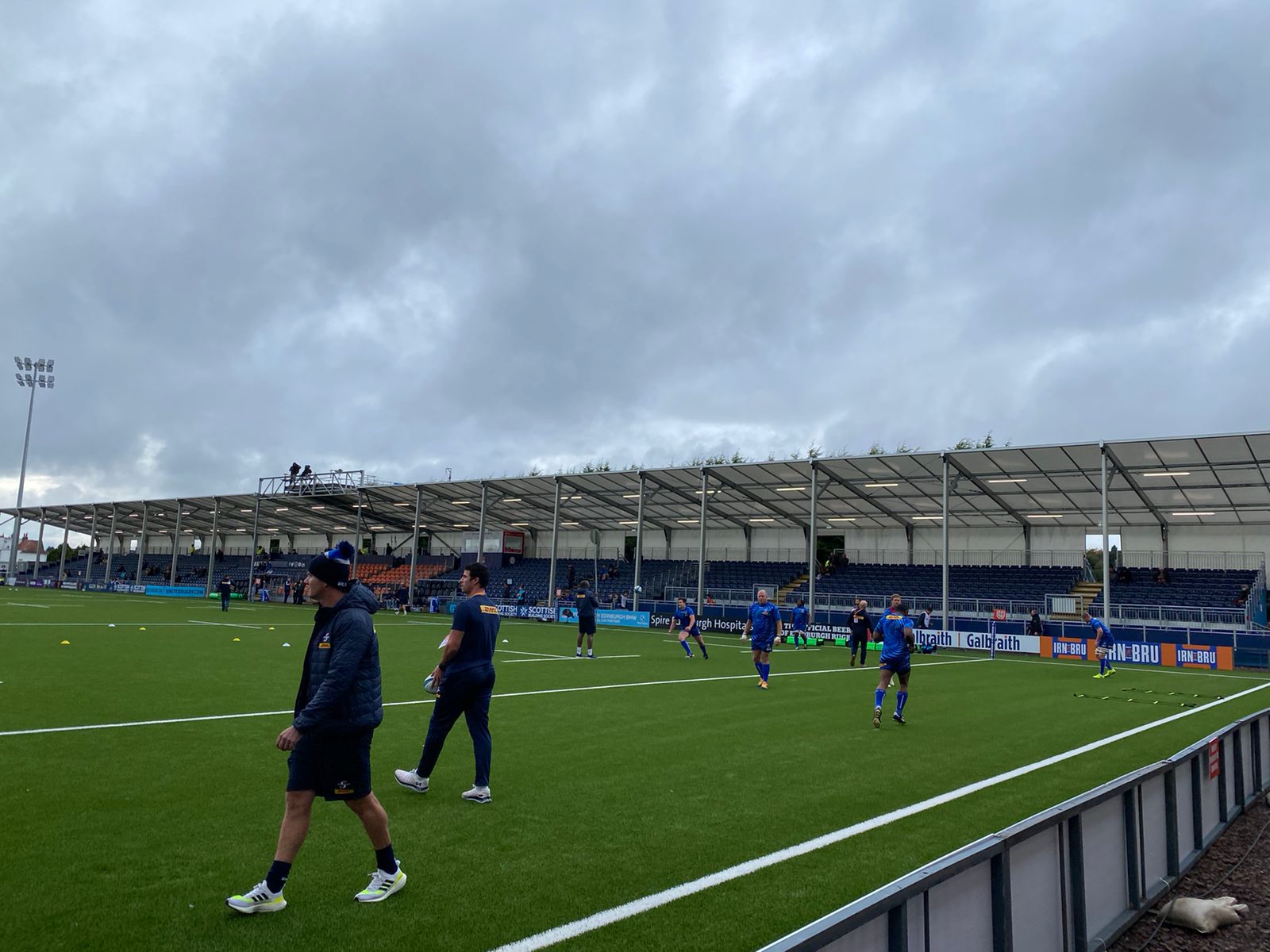 
The DHL Stormers are in Scotland for their United Rugby Championship Round Three clash with Edinburgh. Juan de Jongh will lead the team out for his 100th DHL Stormers cap, as they look for their first win of the campaign.

It is overcast and drizzling at the DAM Health Stadium, with a slight breeze blowing across the ground.

Change to the DHL Stormers team, with Manie Libbok ruled out through injury and Tristan Leyds taking his place on the replacements bench.

0 – Action underway at the DAM Health Stadium where it is overcast and damp for the Vodacom United Rugby Championship clash between hosts Edinburgh and the DHL Stormers.

3 – The home side strike first, with wing Darcy Graham going over for an early try to put them 7-0 up.

7 – Edinburgh double their lead as scrumhalf Ben Vellacott goes over for their second try to make it 14-0.

9 – DHL Stormers give the ball some air and get the offloads going. They surge into the 22 and it is fullback Warrick Gelant who finishes the try to cut Edinburgh’s lead in half.

15 – Breakdown penalty in the 22, so the DHL Stormers can clear and set up a line-out on halfway.

17 – A pass flies into touch, so Edinburgh have an attacking opportunity. They go wide and into the 22, but Sergeal Petersen comes across to force Graham in to touch.

19 – Obstructive running from Edinburgh so Swiel kicks it into the corner as they look for a try.

21 – Edinburgh steal the line-out and clear. DHL Stormers run it back and win a penalty at the breakdown. It goes into the corner again and they maul. Edinburgh collapse so they have another penalty in the corner.

23 – It goes to Sergeal Petersen who drops the ball. Edinburgh clear and the next throw from Ntubeni is not straight.

27 – Edinburgh move into the 22 with advantage and they take the points as Jaco van der Walt kicks a penalty to take their lead back out to seven.

30 – DHL Stormers back on the attack as they win a line-out in the 22. They get within inches of scoring but it is lost forward.

32 – Edinburgh clear to touch so the DHL Stormers have a line-out on the 22.

34 – All-square at the DAM Health Stadium as Evan Roos links up with Paul de Wet to put the scrumhalf over for the second try for the DHL Stormers. Game-on.

36 – Van der Walt puts Edinburgh back in front with his second penalty which makes it 20-17 just before half-time.

38 – Edinburgh in from the side this time, so Swiel kicks his second penalty to level it up at 20-20.

40 – Half-time at the DAM Health Stadium where there is no separating the two teams. Two converted tries and two penalties apiece as we head into the sheds all-square.

42 – Second half underway. DHL Stormers in opposition half, but Xaba gives away a breakdown penalty so Edinburgh on the attack.

43 – Throw is not straight, so DHL Stormers have a scrum in their own half. It goes to the backline, but a forward pass means Edinburgh get it back.

47 – Some good defence from he DHL Stormers as they drive Edinburgh back. The home side go wide then kick ahead but knock it on so DHL Stormers have a scrum in their 22.

49 – Scrum penalty, so the DHL Stormers can clear and set up an attack. Ball is contested and then knocked on so Edinburgh have a scrum.

52 – Both teams kicking and looking for territory. Edinburgh have it in their own half ad knock it on so DHL Stormers have a scrum.

55 – It goes out to Gelant who finds Pretorius, but the centre is tackled out on the 22. Edinburgh win a penalty at the maul and can clear.

58 – DHL Stormers defence holds out well again, Edinburgh kick high and it is lost forward so the home side have a scrum.

60 – Scrum penalty for Edinburgh this time and Van der Walt has a shot at goal but it drops short.

63 – Edinburgh have a kickable penalty and they go for the corner, but the DHL Stormers defence holds up well and they win a breakdown penalty.

65 – DHL Stormers with a kickable penalty this time, but Swiel pushes it wide. Still locked up at 20-20.

68 – Van der Merwe offside this time, so Edinburgh kick to the corner as they look for a try.

70 – DHL Stormers force a knock-on, so they have a scrum in their 22. This game hangs in the balance as the rain starts to fall.

75 – Slippery ball now and it is lost forward in midfield by Edinburgh. Great opportunity from the scrum near halfway for the DHL Stormers. Gelant kicks long and it is out into touch on the 10 metre line.

78 – DHL Stormers maul, but Edinburgh get the penalty, so they will have a line-out near halfway this time.

79 – A late knock-on from Edinburgh means that the DHL Stormers have a scrum on halfway and one last chance to win it.

80 – Full-time at the DAM Health Stadium and after a scoreless second half this one ends in a 20-20 stalemate. Not the result we wanted, but incredible fight for 80 minutes in difficult conditions from the DHL Stormers.