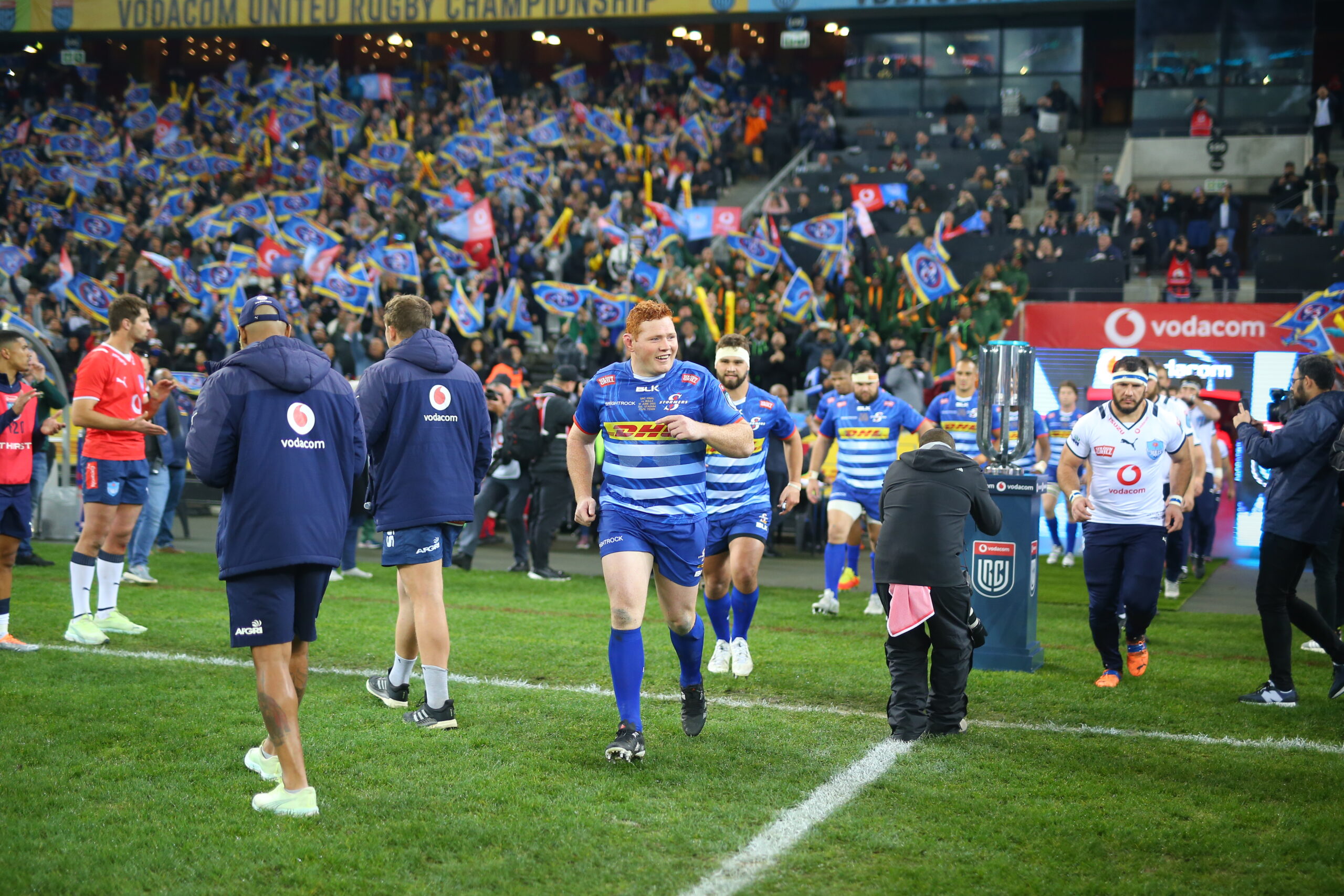 
The DHL Stormers are up against the Vodacom Bulls in the Vodacom #URC Grand Final at DHL Stadium tonight. Follow it live here with our updates.

There was a light shower earlier, but the rain has cleared and the Faithful are here in their numbers as the DHL Stormers warm up.

Not long now until the teams come out and we get this Grand Final underway. Crowd is absolutely electric.

The teams come out onto the pitch and the crowd goes wild. We are all set for the Grand Final.

0 – The Bulls kick off and it is put into the stands straight away. Bulls get an early maul penalty and they kick it into the corner.

2 – Bulls strike first with centre Harold Vorster going over for an early try.

4 – Libbok kicks high and Willemse gets there but loses it forward. Bulls with the knock-on in the 22 so the DHL Stormers have the first scrum.

7 – Captain Kitshoff wins a scrum penalty so Libbok can clear to halfway.

9 – Good ground made from the maul, but it goes down and the Bulls get a breakdown penalty.

11 – Breakdown penalty from centurion Deon Fourie this time and the kick from Libbok takes them up to the 22. Lost forward in midfield by Roos, Bulls run from their 22 and a kick ahead is charged into touch.

14 – Both teams kicking and looking for territory. Lost forward in contact by Gelant so Bulls have a scrum on the 10m in DHL Stormers territory.

17 – Bulls maul but that man Fourie wins another breakdown penalty on the 22 so DHL Stormers can clear it.

20 – Bulls win the high ball and kick into the 22. DHL Stormers get back and Jantjies puts it into touch.

22 – Bulls drive into the 22, but another breakdown penalty from Fourie keeps them at bay.

25 – Great touches from Gelant who gets an offload away, but it is lost forward so the Bulls get a scrum on the 22.

28 – DHL Stormers force a knock and a good kick from Jantjies and tackle from Petersen forces another.

32 – DHL Stormers march into the 22 and Bulls go offside. Libbok has a shot at goal, but puts it wide.

34 – DHL Stormers keep the pressure on and a flowing backline moves sees them move into the 22, but it’s lost forward by Gelant, so Bulls have a scrum.

38 – DHL Stormers come from deep and Gelant puts a rolling grubber out in the 22.

40 – DHL Stormers have the final say in the first half as a Libbok penalty sees them trail 7-3 at half-time.

42 – Second half underway at DHL Stadium where the crowd are getting fully into it.

43 – Scrappy ball at the breakdown hacked through by the Bulls and Petersen is there but he is isolated. Smith kicks the penalty to make it 10-3.

44 – Great grubber from Gelant into the 22 and Bulls carry it back over the tryline, so we have an attacking scrum.

45 – Evan Roos forces his way over for the try and Libbok adds the extras to draw us level at 10-10.

48 – DHL Stormers on the attack, with Gelant collecting his own chip kick and going into the 22.

52 – Bulls hack the kick through but great defence from Senatla knocks it loose and the DHL Stormers clear.

55 – JJ Kotze goes off for a head knock and the TMO is checking for a high tackle. It’s a yellow card for Cornal Hendricks.

57 – Libbok kicks to the corner and they maul. Replacement hooker Andre-Hugo Venter is over for the try which gives the DHL Stormers a 15-10 lead.

60 – Another strong maul takes the DHL Stormers over halfway.

66 – High ball is spilled by the Bulls and DHL Stormers snap back onto the attack in the 22.

68 – They keep hammering away and win another penalty so it goes into the corner again.

70 – Big hit on Gelant and the Bulls win it back and kick high. Ball secured and Jantjies finds a good touch just outside the 22.

73 – High ball won in the 22 by Petersen. The Bulls intercept the offload but carry it over the tryline so we have an attacking scrum.

77 – DHL Stormers kicking into Bulls territory to play the game out in their half. Knock-on means the ulls have a scrum.

80 – It’s all over at DHL Stadium. The DHL Stormers are the champions.