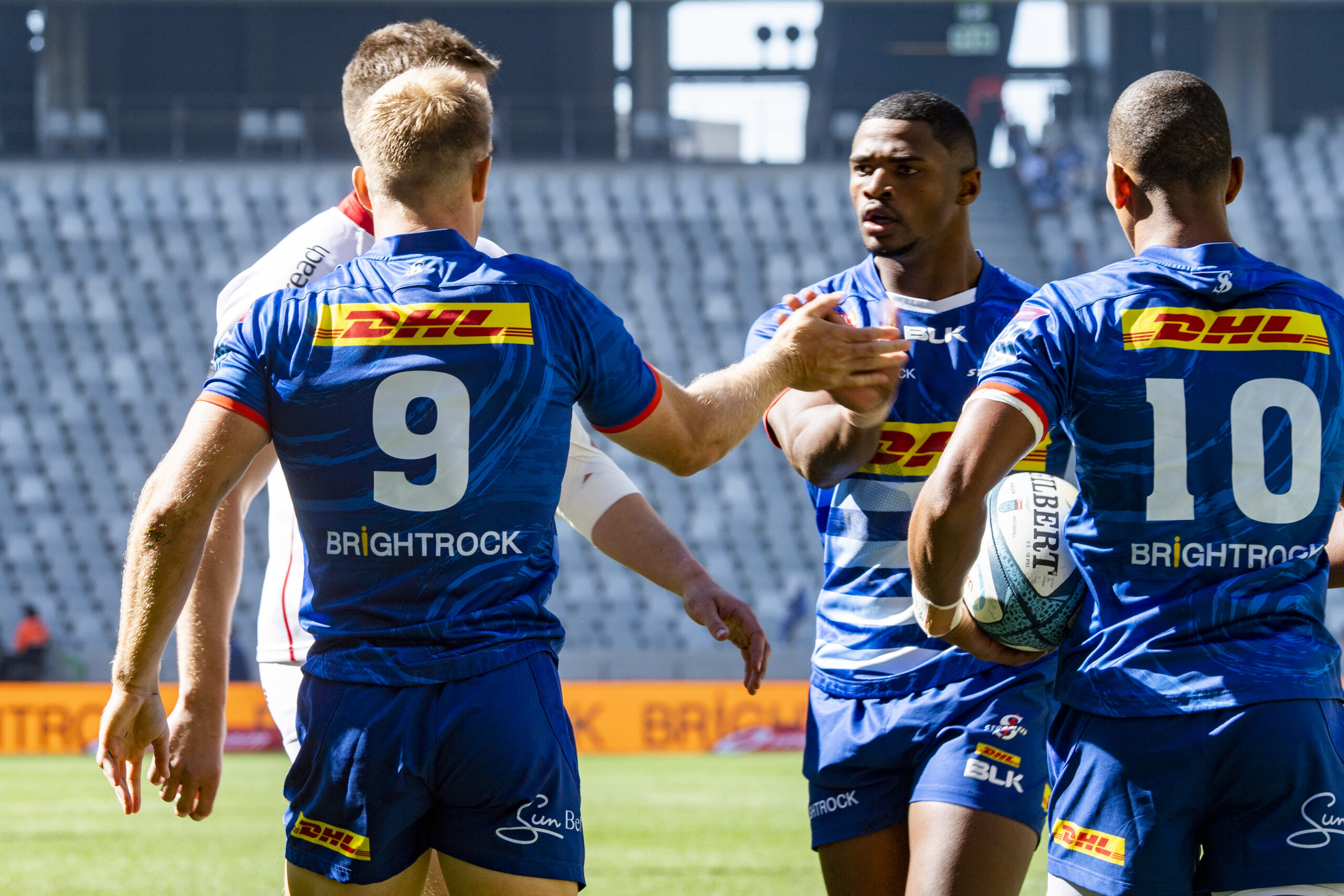 
The DHL Stormers are looking to make it four straight home wins when they take on Ulster on a sunny day at DHL Stadium today.

Ulster are the first Irish team to play a Vodacom United Rugby Championship match in Cape Town and currently sit second on the standings, so this should be an epic clash between two form teams.

0 – Action underway in the sunshine at DHL Stadium, what a welcome for the DHL Stormers from the Faithful!

3 – What a start at DHL Stadium. Leolin Zas breaks away and finds Paul de Wet in support, with the scrumhalf showing good gas to dive over and put the Faithful on their feet. Libbok’s conversion makes it 7-0.

5 – Breakdown penalty this time and Libbok kicks to the corner as they look for another try.

8 – Some phases and they go close. Quick ball and slick handling sees Leolin Zas get over for the second try to make it 14-0.

11 – DHL Stormers look for territory as Gelant kicks to the corner, but it bounces just wide of the flag, so they will come back for a scrum.

13 – Ulster break through into the 22, but a breakdown penalty from Deon Fourie means the DHL Stormers can clear it.

15 – Throw not straight this time, so Ulster have a scrum just outside their 22.

18 – Hands in the ruck from the DHL Stormers and Ulster choose to kick to the corner as they look for a try in response.

20 – Three mauls in a row from the visitors and eventually tighthead Marty Moore bashes his way over to pull one back for them and make it 14-7.

25 – Both teams have line-outs near halfway, with some high kicks coming in.

28 – High ball lands just outside the 22 and contested well by Damian Willemse before that man Deon Fourie gets in over it. Manie Libbok adds three points to the total to make it 17-7.

30 – DHL Stormers kick for territory after winning a scrum on halfway. Ulster return and Libbok runs it back, but the visitors get a breakdown penalty this time.

33 – Deon Fourie thought he had won another crucial turnover, but the ref disagrees this time. Cooney kicks the penalty to make it a 7-point game again at 17-10.

40 – A penalty on the stroke of half-time from Manie Libbok gives the DHL Stormers a 20-13 lead at the break.

42 – Second half underway, with both teams kicking for territory.

45 – Ulster win a penalty and kick out in the 22 and set another maul. They bash away, but the defence holds firm and forces a knock-on. Great clearance kick from Warrick Gelant takes it up to halfway.

48 – Ulster kick in behind and Gelant is there. He passes to Senatla who drops it so Ulster have an attacking scrum in the 22.

50 – Turned over at the breakdown and cleared by the DHL Stormers. Ulster run it back and Ruhan Nel is taken around the neck so they can move into Ulster territory.

52 – DHL Stormers maul and then go to the backline, but it is knocked on and then kicked long by Ulster. Senatla puts it high and chases. It goes up to the TMO and the result is an Ulster scrum.

58 – Ulster come up with their second try from centre Stuart McCloskey to bring the visitors right back into it at DHL Stadium.

61 – Ulster on the attack again and an arm from Dayimani catches one of them high so the visitors kick to the corner again.

63 – Great maul defence from the DHL Stormers wins them a scrum on their tryline. Scrum penalty earns them the exit.

65 – Ulster carry into the 22 and another crucial breakdown penalty means the DHL Stormers can clear it again.

67 – DHL Stormers keeping the ball in opposition territory as they search for more points.

70 – Tense stuff here, neither team able to find much momentum or dominance with the game in the balance.

72 – Ulster burst into the 22 and the scramble defence comes across and forces them into touch.

75 – Crucial scrum penalty on the tryline means the DHL Stormers can clear it again.

78 – Ulster come again with a maul and then break off it. They are over the line and the try is awarded, but the TMO is checking just before the kick. The try has been disallowed and the Faithful are loving it.

79 – It’s another crucial scrum penalty, the forwards have really delivered when we needed it most.

80 – That’s it, the DHL Stormers have held out for a great win, that’s four at home in a row now.