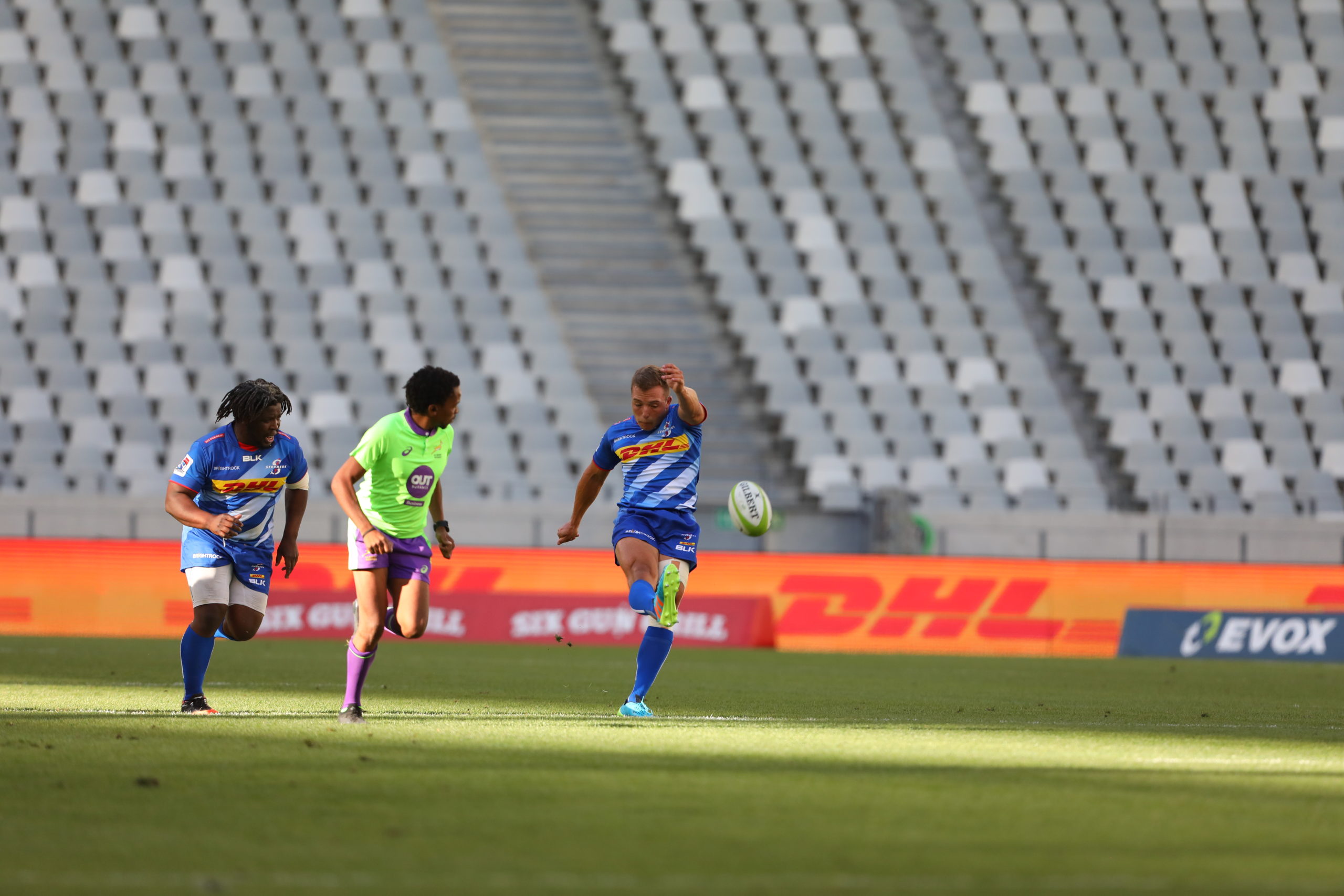 
The DHL Stormers take on the Tafel Lager Griquas in Kimberley in a preparation match. There are just two changes to the starting line-up which did duty against Toyota Cheetahs at Cape Town Stadium last week, with outside backs Sergeal Petersen and Sihle Njezula coming in.

Ernst van Rhyn comes into the starting line-up and will captain the DHL Stormers in Kimberley today in the absence of Chris van Zyl who has picked up a shoulder niggle. Salmaan Moerat comes onto the replacements bench.

0 – Kick-off under blue skies at a breezy Tafel Lager Park in Kimberley where the DHL Stormers are up against Tafel Lager Griquas in a preparation match. DHL Stormers playing into the wind in the first half.

2 – Griquas awarded a penalty after an early line-out and they kick for the corner as they look for an early try.

4 – Obstruction from Griquas just outside the 22, so DHL Stormers can clear and will have a line-out in opposition territory.

5 – DHL Stormers surge into the 22 and win quick ball. It goes out to Njezula on the wing but is knocked on by a Griquas defender, so DHL Stormers have the scrum.

6 – They keep the tempo high as they launch phase after phase. Quick tap from scrumhalf Godlen Masimla who stretches to score under the poles and put them 7-0 up after 6 mins in Kimberley.

10 – Griquas get a line-out on the 22 and run a set play which puts wing Ederies Arendse over for a try which levels it up at 7-7.

13 – DHL Stormers awarded the scrum, but it is knocked on. Ali Vermaak blown up for illegal scrumming so the Griquas set up another attacking line-out.

15 – Ball goes loose and is picked up by Masimla, he breaks away and find Njezula on his inside, but the Griquas haul him in and isolate him to make the turnover and clear it.

17 – Turnover from Scarra Ntubeni but it is kicked out on the full by Smit so Griquas can attack again.

19 – DHL Stormers stray offside, so Tafel Lager Griquas flyhalf George Whitehead kicks a penalty to give the home side a 10-7 advantage after 19 mins in Kimberley.

21 – Tafel Lager Griquas down to 14 men after scrumhalf Stefan Ungerer is shown a yellow card for a cynical infringement. Kade Wolhuter kicks the penalty to level it up at 10-10.

25 – Huge scrum from the DHL Stormers on their 22, so Wolhuter finds touch just over halfway to set up an attacking opportunity.

28 – DHL Stormers backline show good composure to move the ball wide and support the ball-carrier. The break down the left comes from Sihle Njezula, who puts Godlen Masimla over for his second try. That puts them 17-10 up.

31 – Sergeal Petersen gets caught in the 22 and Griquas win a breakdown penalty, so Whitehead kicks a second penalty to reduce the DHL Stormers’ lead to 17-13.

34 – Another hue scrum from the DHL Stormers and Wolhuter has a shot at goal but it drifts wide.

40 – DHL Stormers finish the first half in style, Kade Wolhuter dances past a few to get them on the front foot, a long pass from Ruhan Nel finds Sihle Njezula who flicks it out Sergeal Petersen to score in the corner. That takes their lead out to 24-13 at the break.

43 – Good defensive pressure from the DHL Stormers and the charge-down from Marcel Theunissen sits up for the flank to go over for the fourth try. That takes their lead out to 31-13.

50 – DHL Stormers come from their own half and the backline delivers another top try. Quick hands to Sihle Njezula who breaks free and then rushes into the 22 where he find Kade Wolhuter. The flyhalf converts his own try to make it 38-13.

58 – Tafel Lager Griquas come up with their second try as hooker HJ Luus scores from a maul to reduce DHL Stormers lead to 38-18.

63 – DHL Stormers ring the changes as the replacements bench comes on to make an impact in the last 20 minutes.

70 – Tafel Lager Griquas replacement Daniel Kasende scores in the corner to reduce the DHL Stormers’ lead to 38-25 with 10 mins left to play in Kimberley.

74 – Another try from the home side, this time replacement flyhalf Thinus de Beer and the DHL Stormers lead is down to 38-32 with five mins left in Kimberley.

78 – DHL Stormers win a scrum penalty and replacement flyhalf Chris Schreuder has a shot at goal, but puts it wide.

80 – Full-time in Kimberley where the DHL Stormers have scored five tries to claim a 38-32 win in an entertaining preparation match against Tafel Lager Griquas.