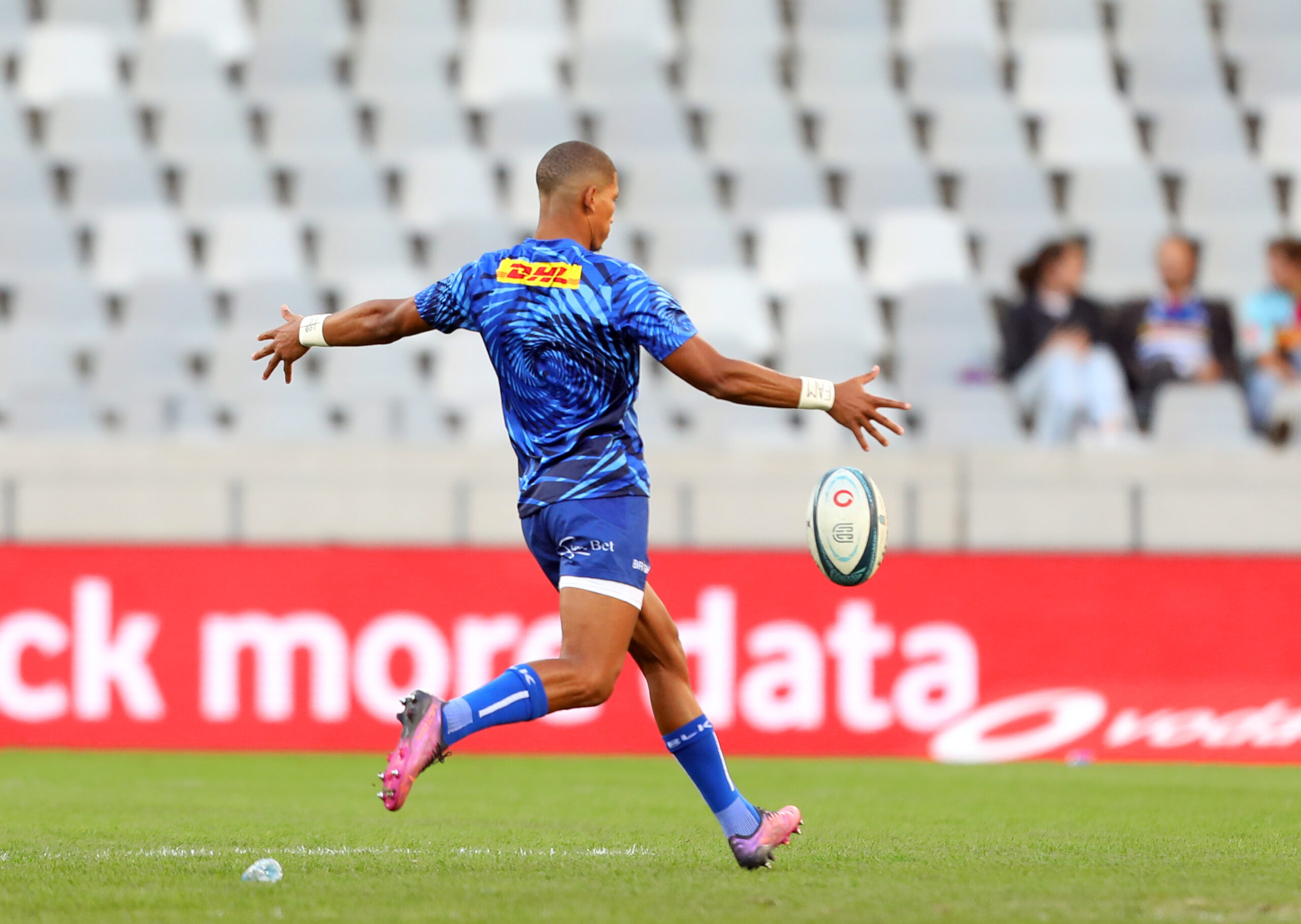 
The DHL Stormers are looking for their fifth straight home win and their third consecutive win against Welsh opposition as they face the Ospreys at DHL Stadium.

Clear but breezy conditions here at DHL Stadium. Two strong teams so we should be in for a classic.

0 – Kick-off at DHL Stadium and the Ospreys win an early scrum on the 22. They win a penalty and Anscombe kicks the points to make it 3-0.

5 – DHL Stormers respond with the first try as Manie Libbok sets up Paul de Wet to race through and score and then adds the conversion to make it 7-3.

9 – They surge into the 22 again and some great interplay before big Adre Smith dives over under the poles to make it 14-3.

12 – A scrum in the 22 and Senatla breaks away down the blindside. He kicks ahead and is obstructed, so they kick into the corner.

15 – Ospreys win it back and earn a scrum, they move it up to halfway and get a penalty to go on the attack.

20 – DHL Stormers win a scrum on the 22, but it is dropped by Libbok so Ospreys with the scrum.

24 – Ospreys go wide and brought down on the 22, they lose the ball but then win another scrum on the 22. Anscombe drops it this time so the DHL Stormers have a scrum just outside the 22.

25 – Scrum penalty, so Libbok finds touch in Ospreys half.

28 – DHL Stormers come up with another beauty as Libbok puts them on the front foot before it goes wide to Zas who runs over the last defender to score and make it 19-6.

32 – Ospreys break down the left and regather a kick ahead, but it is turned over and cleared by the DHL Stormers.

34 – DHL Stormers go on the attack again from a scrum, Libboks grubber runs into touch in the 22. Line-out infringement so Ospreys can clear.

38 – More points from the boot of Manie Libbok, this time a penalty to take us out to a 16-point lead just before half-time.

40 – Half-time at DHL Stormers where the DHL Stormers have scored all three tries to take a 22-6 lead into the break. Plenty for the Faithful to cheer in that first 40, more to come in the second half.

42 – Back underway at DHL Stadium and Evan Roos wins a breakdown penalty on the 22 to give the home side another attacking opportunity.

45 – Ospreys win a penalty this time and kick to the corner but knock it on so DHL Stormers have a scrum.

47 – They clear it and chase hard, forward pass from Ospreys so DHL Stormers have a scrum near halfway this time.

49 – Ospreys win a breakdown penalty so they can exit the 22. They knock it on at the line-out, so DHL Stormers hve it back.

51 – They kick high and Ospreys secure it, a cross-kick goes out on the full so DHL Stormers have a line-out on halfway.

53 – DHL Stormers carry it up to the 22, but it is lost forward and then played on the ground, so Ospreys can clear.

55 – That try was worth a bonus point all on its own. Some magic from the backline sees Leolin Zas go in for his second. Willemse and Senatla linking up well to create that chance.

60 – DHL Stormers back on the attack thanks to an intercept from Rikus Pretorius, but they are called back for a forward pass in the 22.

64 – Ospreys run it out of their 22 and kick into our 22. Herschel Jantjies is there and does well but they win a breakdown penalty and kick into the corner, Zas shown a yellow card for a cynical infringement.

66 – Forwards stop the maul and win a scrum., but it is knocked on by Jantjies.

69 – Breakdown penalty won by Deon Fourie, so we can clear it.

71 – Ospreys run it back and another yellow card for Manie Libbok after he attempted an intercept, so we are down to 13.

73 – Another attacking line-out for Ospreys as they look for their first try. DHL Stormers defending with all they have and they win the scrum.

77 – Incredible defence as they win another breakdown penalty in the 22. Game is won, but these guys are playing for more than that.

80 – The Ospreys score a late consolation try, but it is not enough as the DHL Stormers take a full five points and maintain their place at the top of the South African Shield.