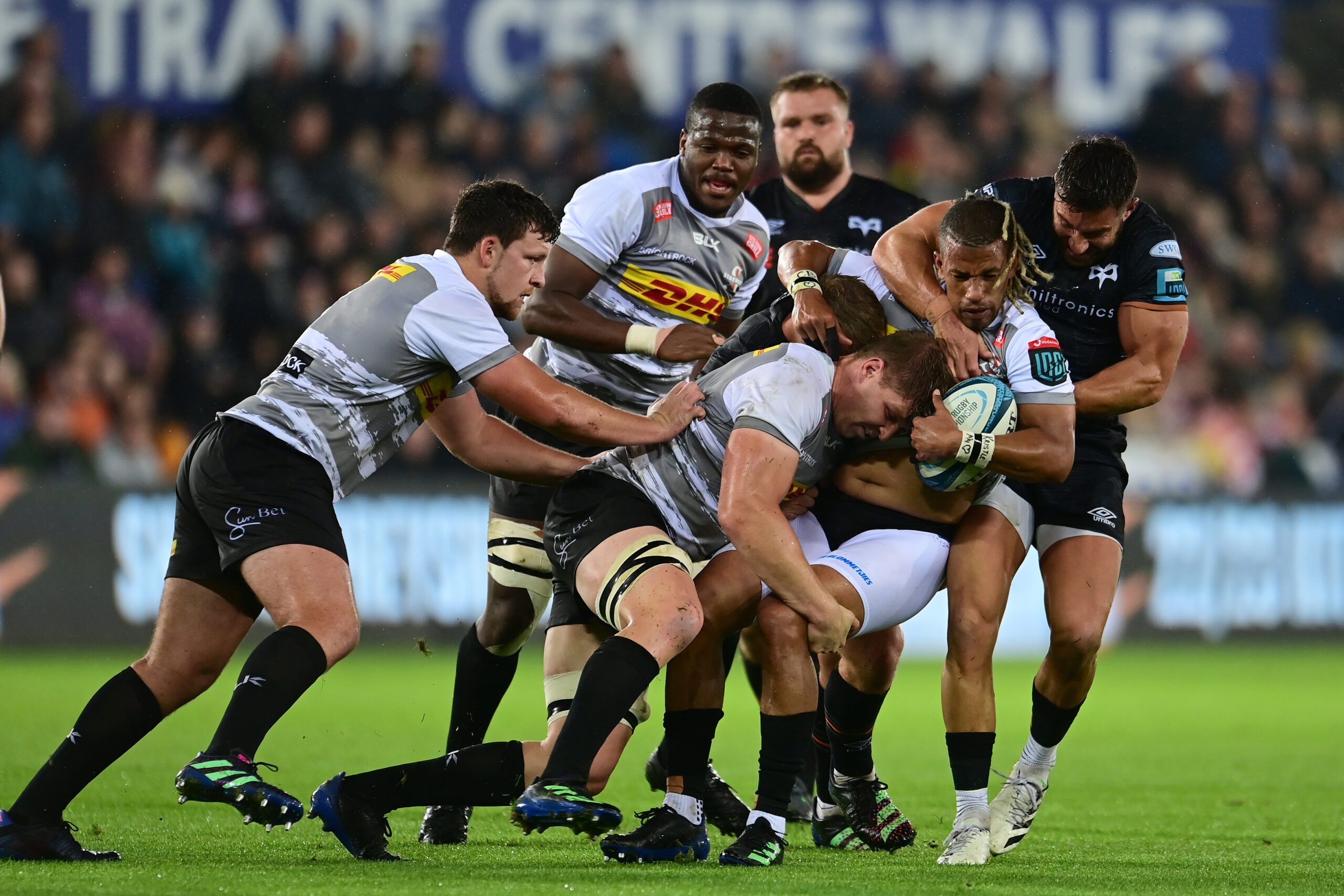 
The DHL Stormers are in Swansea where they are up against Welsh Shield champions the Ospreys as they look to make it four straight wins this season. Follow all the action here with our live updates.

It is overcast and cool, with some rain falling in Swansea, which should make things interesting tonight.

0 – Kick-off in Swansea. Ospreys kick to touch and we maul. The ball squirts out the side of a ruck and home side have it back.

3 – Ball goes wide to Davids and he loses it forward in a tackle so Ospreys have a scrum.

4 – Breakdown penalty won by Salmaan Moerat so Libbok kicks to the corner.

6 – They get close to the line and Blommetjies grubbers, but Webb is there to clear it. Ospreys knock-on near halfway so we have a scrum.

9 – Both teams kicking contestables in the wet conditions. Ospreys lose it in the tackle so we have another scrum.

11 – Lost forward by Leuia in midfield this time so Ospreys have the scrum this time.

14 – Good patience in our half and Leuia wins a breakdown penalty this time so Libbok can clear it.

16 – Paul de Wet under pressure after a maul and Ospreys get the breakdown penalty this time.

17 – Forward pass from Ospreys in midfield so we have another scrum. Good rolling kick from Libbok finds touch in the 22. That’s a 50-22 so we have the line-out.

19 – Du Plessis take it up in midfield, but it is knocked on at the base of the ruck, so Ospreys have a scrum in front of the poles.

22 – Ospreys clear it and win it back from the line-out. They kick again and force a knock-on so another scrum on the 22.

25 – Scrum penalty for the Ospreys this time and they opt to kick to the corner in search of the try.

28 – Great defence forces a knock-on and we break out of the 22. Davids finds Blommetjies and we get a breakdown penalty on halfway. Libbok has a shot at goal from inside his own half and it is over to make it 6-0.

30 – Another Ospreys knock-on so we have a scrum on halfway.

33 – Lost forward by Davids this time so Ospreys have a scrum.

38 – Ospreys back on the attack and they come close, but it is lost forward on the tryline.

42 – Second half underway as the rain continues to pour down in Swansea. Libbok knocks a high ball on so Ospreys have a scrum just outside the 22.

43 – Great defence and a breakdown penalty is won by Venter. Ospreys not rolling away this time, so Libbok kicks it up to the 22 this time.

45 – Venter pushed into contact by Moerat, so Ospreys can clear it. We win it back and run from our own half, but it is lost forward in a tackle, so Ospreys have a scrum.

49 – High ball taken by Blommetjies but Ospreys win a breakdown penalty and Myler kicks it over to level things up at 6-6.

51 – Throw from Dweba is not straight, so Ospreys have another scrum.

53 – Both teams kicking for position before blistering attack as Manie Libbok turns it inside to Leolin Zas, who bursts through and then puts Paul de Wet over for the opening try to make it 13-6.

56 – Ospreys get a scrum penalty this time and move into DHL Stormers territory but it is lost forward in contact so we have a scrum just outside the 22.

59 – Blommetjies clears from the scrum and Ospreys will have to come from halfway.

62 – Lost forward so we have a scrum to attack from.

65 – Mngomezulu kicks the ball dead, so the Ospreys are back on their tryline.

67 – Ball lost forward in midfield by Dweba, so Ospreys have a scrum near halfway. They win a scrum penalty so Myler kicks the three points to make it 13-9.

70 – Strong maul from DHL Stormers wins a penalty. Libbok kicks another three points to make it 16-9.

73 – Ospreys win a penalty at the maul this time so Myler kicks to the corner as they look for the draw.

75 – Another penalty from the maul and they kick to the corner again. Maul try in the corner for the hosts and the conversion levels it up again at 16-16.