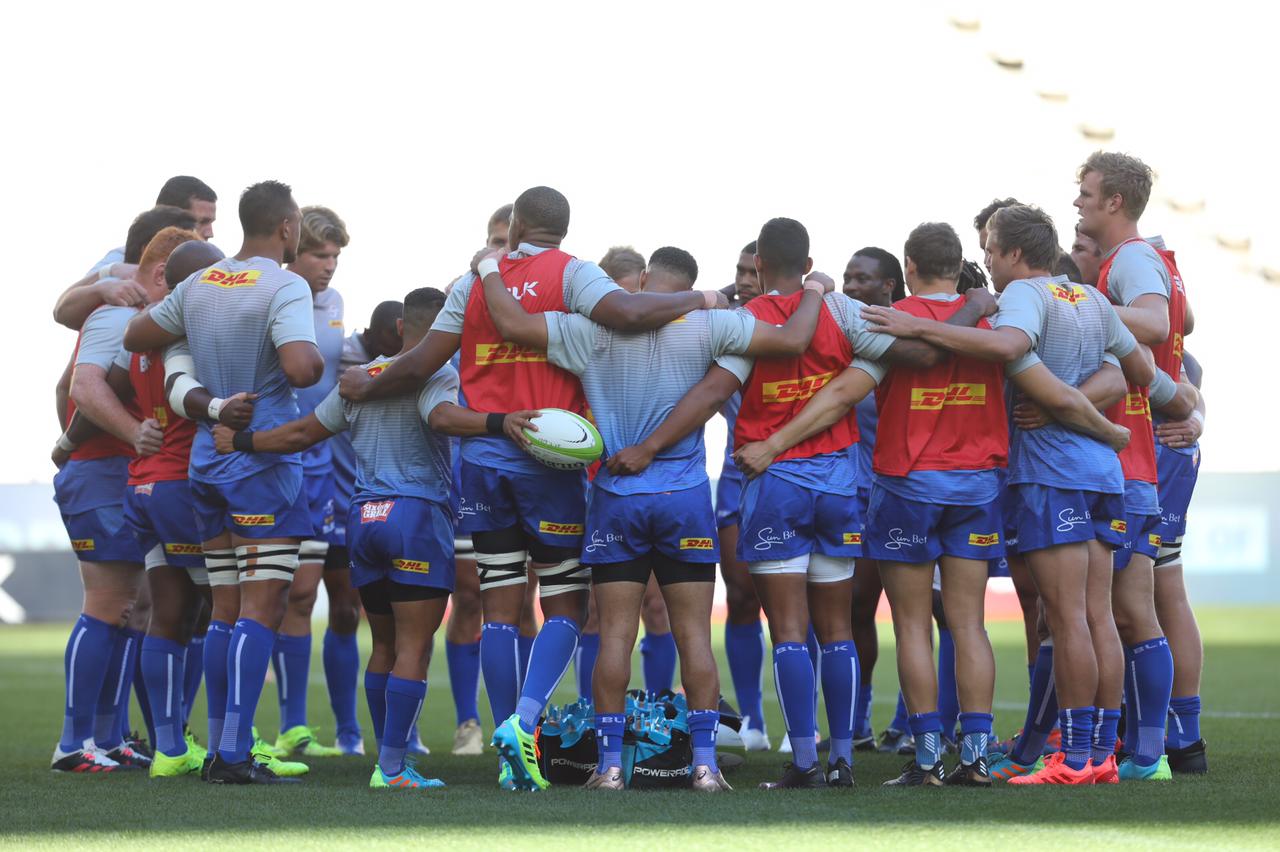 
The DHL Stormers are back at home at Cape Town Stadium for their final preparation game against the Emirates Lions. Conditions are perfect here, with a slight breeze blowing under a blue sky.

There has been a late change to the DHL Stormers team with Ernst van Rhyn ruled out through illness. Marcel Theunissen comes into the starting line-up on the flank and David Meihuizen is on the bench.

0 – DHL Stormers don’t waste any time, scoring a try in the first minute. The kick-off is won back and it goes down the hands, the grubber is picked up by Seabelo Senatla and then worked back inside to Herschel Jantjies to score. 7-0.

5 – DHL Stormers keep coming, carrying the ball up in opposition territory. The Lions win it back but it is dropped by Jantjies so the DHL Stormers have the first scrum.

8 – Lions win the ball back and clear but Willemse finds good ground with a probing kick as the DHL Stormers continue to dominate territory. Breakdown penalty won by Lions prop Sadie, so the visitors get in DHL Stormers half for the first time, but the line-out is stolen and the hosts can clear.

12 – DHL Stormers not rolling away this time, so the Lions kick it into the corner. DHL Stormers defending their line bravely. The ball is over the tryline between the poles, but it is held up.

15 – The Lions knock the ball on that is great defence of the tryline from the DHL Stormers. They clear it and win another penalty at the line-out so they are in Lions territory again.

17 – Great defence on the tryline and the DHL Stormers march upfield quickly. A turnover and the ball goes wide. Ruhan Nel makes a linebreak and Seabelo Senatla finishes off a great team try which puts them 14-0 up.

20 – The tries keep coming at Cape Town Stadium. Great work from Abner van Reenen and then some magic from Seabelo Senatla who puts Herschel Jantjies over for his double. That takes the lead out to 21-0.

24 – DHL Stormers back on the attack and they win a breakdown penalty right in front of the poles after a big scrum. Abner van Reenen slots the kick to take the lead out to 24-0 after 25 mins.

29 – DHL Stormers almost score their fourth try. A big clearance from Damian Willemse is knocked into touch by Lions fullback EW Viljoen. A quick throw-in from Sergeal Petersen and Dan du Plessis is brought down just short of the tryline where the ball is lost forward.

31 – Lions win a scrum penalty on their tryline and they can clear it.

33 – Lions on the attack again but a good hit in midfield forces a knock-on so the DHL Stormers have a scrum on their 22.

35 – Breakdown penalty for the Lions on halfway and they kick it into the corner as they look for their first points.

37 – DHL Stormers steal the line-out in the 22 and they clear to just outside the 22. Some big defence required here if they are going to keep the Lions pointless in the first half.

38 – DHL Stormers rip the ball away and break out, taking it all the way up the Lions 22. Damian Willemse kicks a grubber through and the visitors manage to scramble it away into touch.

40 – Half-time at Cape Town Stadium where the DHL Stormers have scored three unanswered tries to take a 24-0 lead into the break. Great all-round display so far, now to back it up in the second half.

42 – Second half underway at Cape Town Stadium. DHL Stormers have brought on Steven Kitshoff, Bongi Mbonambi and Frans Malherbe up front. Paul de Wet is on the wing, with Damian Willemse off and Sergeal Petersen shifts to fullback.

45 – The new front row win a scrum penalty and the DHL Stormers move into the 22. Marvin Orie is also on, with JD Schickerling moving to blindside flank.

50 – They kick it into the corner and launch a powerful maul. Hooker Bongi Mbonambi goes over for the fourth try which makes it 31-0 with 30 mins left.

55 – DHL Stormers on the attack again in the 22, but the Lions win a penalty this time and clear it. Another breakdown penalty for the Lions on halfway and they are on the attack now.

57 – Great defence from the DHL Stormers again as they clear their lines and then force an error at the line-out to win a scrum just outside the 22.

62 – Another three points from the boot of Abner van Reenen who has not missed a kick today. That takes the lead out to 34-0 with 18 mins left.

66 – Multiple phases on attack from the DHL Stormers before Abner van Reenen drops back and pops over a cheeky drop-goal which takes the lead out to 37-0.

70 – The Lions go in for their first points of the game with a try from replacement MJ Pelser which reduces the DHL Stormers lead to 37-5 with 10 mins left to play at Cape Town Stadium.

75 – Great interplay from Kade Wolhuter and Sergeal Petersen takes it into the 22. Pressure on defence forces a loose ball and Ruhan Nel goes over for a deserved try to take the lead out to 44-5 with 5 mins left.

77 – Van Reenen is shown a yellow card for knocking the ball over the dead-ball line and the Lions are awarded a penalty try.

78 – The DHL Stormers surge upfield and Herschel Jantjieslooks to be over in the corner for his hat-trick try, but there was a foot in touch.

80 – Full-time at Cape Town Stadium where the DHL Stormers have scored five tries in a comprehensive 44-12 win in their final preparation match against the Emirates Lions. Bring on the Rainbow Cup.