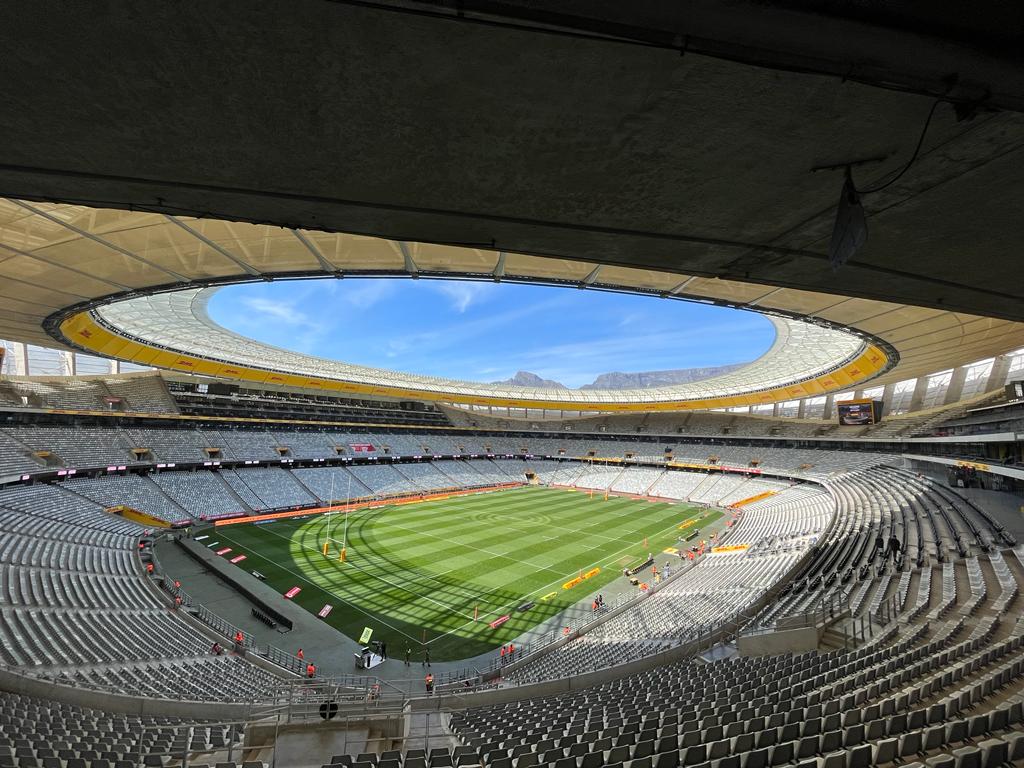 
The DHL Stormers are up against Edinburgh in their first Vodacom United Rugby Championship match at DHL Stadium since lifting the trophy last season. Follow all the action live here with us.

Conditions are perfect here for rugby, so we should be in for a great game as the DHL Stormers look to make it 13 consecutive wins.

0 – Kick-off in the sunshine in front of the Faithful. Edinburgh lose a high ball forward so DHL Stormers have an early scrum just short of halfway.

3 – The scrum is revered after some resets. Edinburgh run and DHL Stormers go offsides so flyhalf Blair Kinghorn puts the visitors 3-0 up.

6 – Very stop-start with the referee’s whistle dominating early on.

8 – Great maul defence wins a scrum for the home side.

11 – High tackle on Blommetjies, so Libbok kicks into Edinburgh territory.

13 – Ball is not coming out the maul so Edinburgh have a scrum.

15 – Another offside called and and this time Edinburgh go to the corner.

18 – Edinburgh attack but some great defence forces them out in the corner.

20 – Manie Libbok shown a yellow card for repeated infringements as the DHL Stormers continue to defend in the 22.

25 – More scrums and advantage for Edinburgh, but the defence is holding out.

29 – The pressure and penalty count eventually results in a try from Edinburgh prop Pierre Schoeman to make it 10-0.

31 – Lost forward in the tackle, so Edinburgh have a scrum inside their own half.

33 – Good pressure on defence and the DHL Stormers get a penalty this time which Libbok kicks into the 22.

34 – High tackle from Edinburgh and they go into the corner. Ball is not coming out so Edinburgh have a scrum on their tryline.

37 – DHL Stormers run it back and Du Plessis breaks the line. Inside to Davids who is just short of the tryline.

38 – Yellow card for Edinburgh hooker Stuart McInally. DHL Stormers scrum and another offside means they go to the corner again.

40 – Deon Fourie scores from a maul to send them into half-time trailing just 10-7.

42 – Second half underway and DHL Stormers have an early penalty for offside. A good maul earns a penalty.

44 – Another strong maul and hooker Joseph Dweba busts overs for a try on debut to give the DHL Stormers the lead. Libbok nails the conversion to make it 14-10.

47 – The scoreboard keeps ticking with another three points from Manie Libbok to give us a 7-point buffer at 17-10.

51 – Another card, this time for Evan Roos and Edinburgh take the points to make it 17-13.

53 – DHL Stormers on the attack and making metres, but it is lost forward just outside the 22.

57 – Edinburgh take it through phases, but no way through and then they kick. Blommetjies is there and finds touch.

60 – A great grubber through from Willemse into the 22. Edinburgh scramble back and get it away, but the pressure is on.

66 – Interception from Suleiman Hartzenberg and he races away to score, which makes it 27-13.

72 – Edinburgh with a breakdown penalty but they miss touch. DHL Stormers run it back but a pass flies into touch near halfway.

74 – Edinburgh come again and we are going up to the TMO again. It is a red card for Sazi Sandi.

75 – Edinburgh take advantage of the extra man with a maul try in the corner to make it 27-18.

77 – Edinburgh drop the restart and we have the scrum in the 22. Fouche drops it so Edinburgh can clear.

80 – Bonus point try after the hooter for the second week in a row. Hartzenberg goes over for his second to seal the five points.