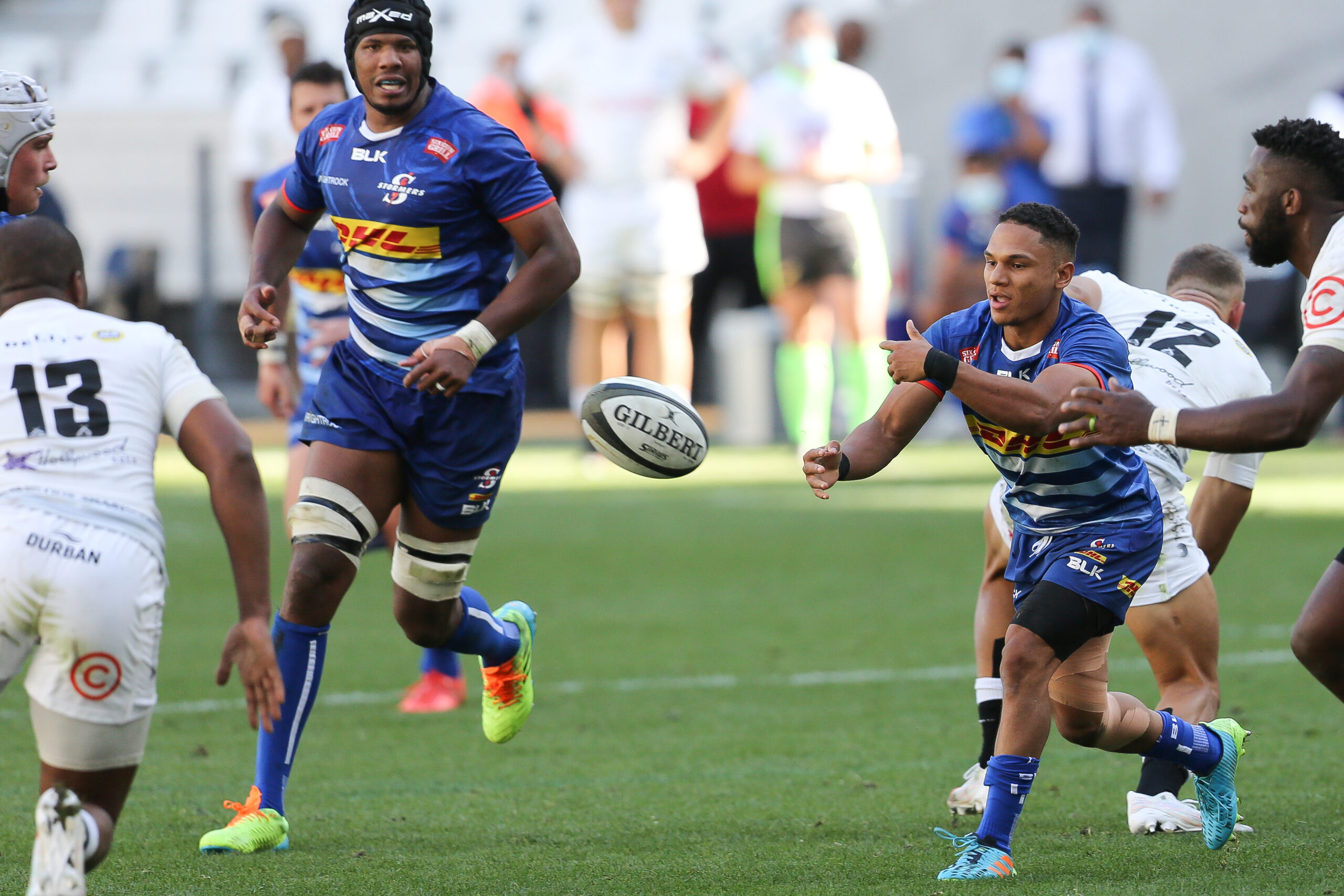 
The DHL Stormers are looking to make it back-to-back wins on the road as they take on the Cell C Sharks in a Vodacom United Rugby Championship coastal clash in Durban.

There are three changes to the DHL Stormers starting line-up that did duty in the 30-26 victory against the Vodacom Bulls last week. Salmaan Moerat (knee) and Evan Roos (rib) have both been ruled out through injury and are replaced by Adre Smith and Hacjivah Dayimani respectively, while Angelo Davids starts on the wing. Loose forwards Nama Xaba and Marcel Theunissen come onto the replacements bench.

It is overcast and humid in Durban, so it should be fairly slippery out there and we are likely to see a lot of kicking and scrumming. Both teams are coming off a win, so we should be set for another classic.

Rikus Pretorius hurt his calf in the warm-up in Durban, so Dan du Plessis comes into the starting line-up at inside centre for the DHL Stormers.

0 – Manie Libbok kicks off as the DHL Stormers look to make it two away wins on the trot. It is overcast and humid in Durban for this coastal clash.

3 – Sharks win an early penalty at a maul and move into DHL Stormers territory where their captain Lukhanyo Am is able to score the opening try to make it 5-0.

5 – DHL Stormers earn a penalty and kick for the corner as they look for a try of their own. They win another penalty in front of the poles, but it is overturned after Deon Fourie ran into the ruck.

9 – DHL Stormers with all the ball, but basic errors stopping them from finishing off at this stage. Knock-on on midfield means the Sharks have the first scrum.

15 – Sharks on the attack now and a cross-kick for Nkosi is knocked on in-goal so the DHL Stormers have a tryline drop-out.

17 – Two penalties in a row for the DHL Stormers sees them move from their 22 into the Sharks half.

20 – Sharks give away a series of penalties and captain Lukhanyo Am is shown a yellow card. Libbok kicks the easy penalty to get the DHL Stormers on the scoreboard.

24 – Another big scrum from the Sharks gives them advantage and they kick the points to make it 8-3.

28 – Breakdown penalty goes against Deon Fourie. Sharks take the penalty but take too long to kick it as the clock runs out.

31 – Another scrum penalty for the Sharks but the kick goes wide.

35 – DHL Stormers defending well as the Sharks apply the pressure in the 22.

38 – More gutsy defence on the tryline. Deon Fourie is shown a yellow card but the Sharks lose it over the line so it is another goal-line drop-out.

39 – Boeta Chamberlain kicks a drop-goal to make it 11-3 just before the break.

41 – Second half underway as the DHL Stormers look to score first and get back within striking distance.

43 – Both teams kicking and looking for territory trying to force a handling error in the slippery conditions.

47 – The hosts make the most of the extra man to score first in the second half. Makazole Mapimpi finishes in the corner to make it 16-3.

50 – Another scrum penalty for the Sharks and they kick the points to make it 19-3.

53 – DHL Stormers go to the blindside from a scrum, with Warrick Gelant producing a magic offload to get it away to Damian Willemse to finish in the corner. Needed a response and there it is.

57 – A scrum penalty for the DHL Stormers for a change and they set the maul and move into Sharks territory.

59 – A good kick and Mapimpi takes it dead. DHL Stormers have an attacking scrum and earn advantage.

61 – Sharks steal the line-out and can clear it. They move downfield and kick another penalty to make it 22-8.

66 – DHL Stormers on the attack now and they win another series of penalties to go into the 22.

68 – The DHL Stormers fighting hard for every inch and eventually get reward from the referee who awards a penalty try after some spoiling from the home side. Cell C Sharks down to 14. This one is not over yet. 22-15.

72 – Two maul penalties for the Sharks this time. They kick at goal but it comes off the post.

74 – Sharks on the attack again and they kick to the corner this time. Great maul defence from the DHL Stormers as they hold out and try and run from their own 22 to score.

77 – DHL Stormers break out of their half and it goes to Gelant who puts in a kick into the in-goal. Sharks cover it but Senatla was taken out off the ball by Nkosi and he is shown a yellow.

78 – First a line-out and then a scrum as they look for a try that will tie the game at the death.

80 – Fassi slaps the ball down and that is another penalty try to tie the game dramatically at the death. 22-22 what a fight back from the DHL Stormers boys.