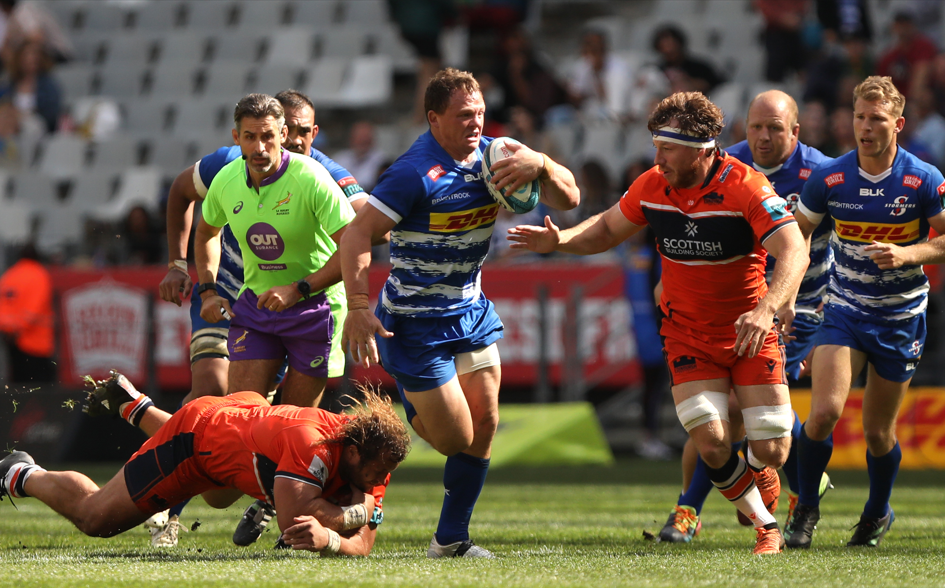 
DHL Stormers Head Coach John Dobson put his team’s bonus point win against Edinburgh down to the character and work-rate of the team in the second half at DHL Stadium.

Despite trailing 10-7 at half-time, the DHL Stormers put together an impressive second 40 minutes in front of the Faithful at DHL Stadium on Saturday.

Hooker Joseph Dweba scored on his debut, while 19-year-old flyer Suleiman Hartzenberg grabbed a brace of tries to secure the full house of five points.

The win means that the DHL Stormers head on their three-week tour to Italy and Wales, which will see them face Zebre Parma, Ospreys and Cardiff, with 10 points to their name.

The two wins at home this season take their current winning streak in the Vodacom United Rugby Championship to an incredible 13 games.

While the final scoreline of 24-18 suggests that it was a comfortable win, they were made to sweat by a determined Edinburgh side in the first half.

Dobson said that his side got on the wrong side of the penalty count early-on by allowing the visitors dominance up front.

“I’m not irritated with my team for their discipline at all, maybe it was just our work-rate which put our discipline under pressure.

“Half-time was about our pack working harder and fronting up, because if we don’t work so hard then defensively we are making more tackles and of course our discipline, which is related because once you are on the back foot you start giving away penalties.

“The thing with rugby now is that penalties equals territory and possession and we got on the wrong end of that.

“We showed character again, it was very similar to last week because we were under the pump for a long time.

“I’m pleased with the result, but I said to the team after the game ‘imagine what we could do if we could get some possession'” he said.

Another positive from the victory, was the gametime that some of the players got under their belts.

The DHL Stormers travel to Italy this week and will face Zebre Parma at the Stadio Lanfranchi on Saturday.