Tickets are available through Computicket- either online at wprugby.computicket.com – or in-store and also from Shoprite/Checkers stores and the DHL Newlands Box Office during match weeks.

Only tickets bought from wprugby.computicket.com, or any Computicket outlet will be valid at DHL Newlands. These are the only outlets which are licenced to sell tickets to DHL Newlands. Tickets obtained from any other source may not be valid.

Season tickets can be purchased online at online.computicket.com, whilst any queries can be directed to the WP Rugby Offices, on 021 659 4600.

2020 will be the last season for the DHL Stormers and DHL Western Province at DHL Newlands, so buy your season ticket now to be part of history and make sure you do not miss anything.

The 2020 DHL Newlands season ticket package is R2390 per ticket and includes a Springbok Test and a special final game, as well as the full Vodacom Super Rugby and Currie Cup campaigns including all possible quarterfinals, semifinals and finals for the DHL Stormers and DHL Western Province.

Payments can also be spread across a number of months by utilizing your budget facility of your credit card (Master/Visa).

There are also further power benefits in the form of discounts/benefits at selected restaurants and partner establishments in Cape Town. These discounts/benefits will apply to the individual holder of a DHL Newlands season ticket.

As a current DHL Newlands season ticket holder, you should have already received a renewal notice from Computicket via email which includes a unique link to renew. If you have not received your email from Computicket, please email Revenne Maritz at rmaritz@wprugby.co.za to request a copy.

Payments for the renewal of your season ticket(s) must reach us by Friday, 24 January 2020 to secure your seat(s) as our 1st home game takes place on 1 February 2020. Seats will be released for sale if payment is not received timeously.

Ref No: (number at top of your notice which must be included with proof of payment)

If you are not interested in renewing your season tickets for the 2020 season, kindly notify us immediately by sending an email to rmaritz@wprugby.co.za and quote your membership number as reference.

Additional scholar season tickets for DHL Newlands can be purchased at the low price of just R200 per ticket. Not only do scholars (under the age of 19) have their own dedicated seating area in the Jan Pickard and Danie Craven Stands, but they will, again, have access to every single DHL Western Province and DHL Stormers game at DHL Newlands in 2020, including finals. To purchase, please request an application form from sbardien@wprugby.co.za

In this place is power.
The power of togetherness.
Harness the power. 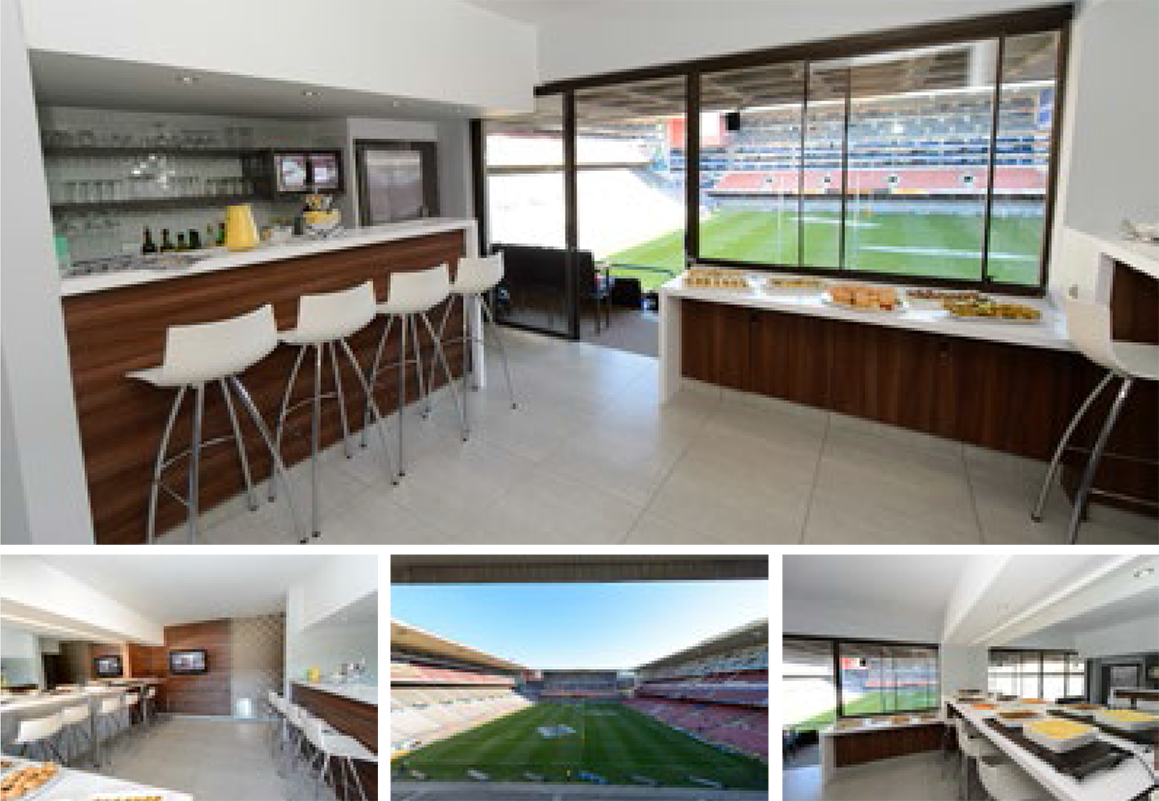 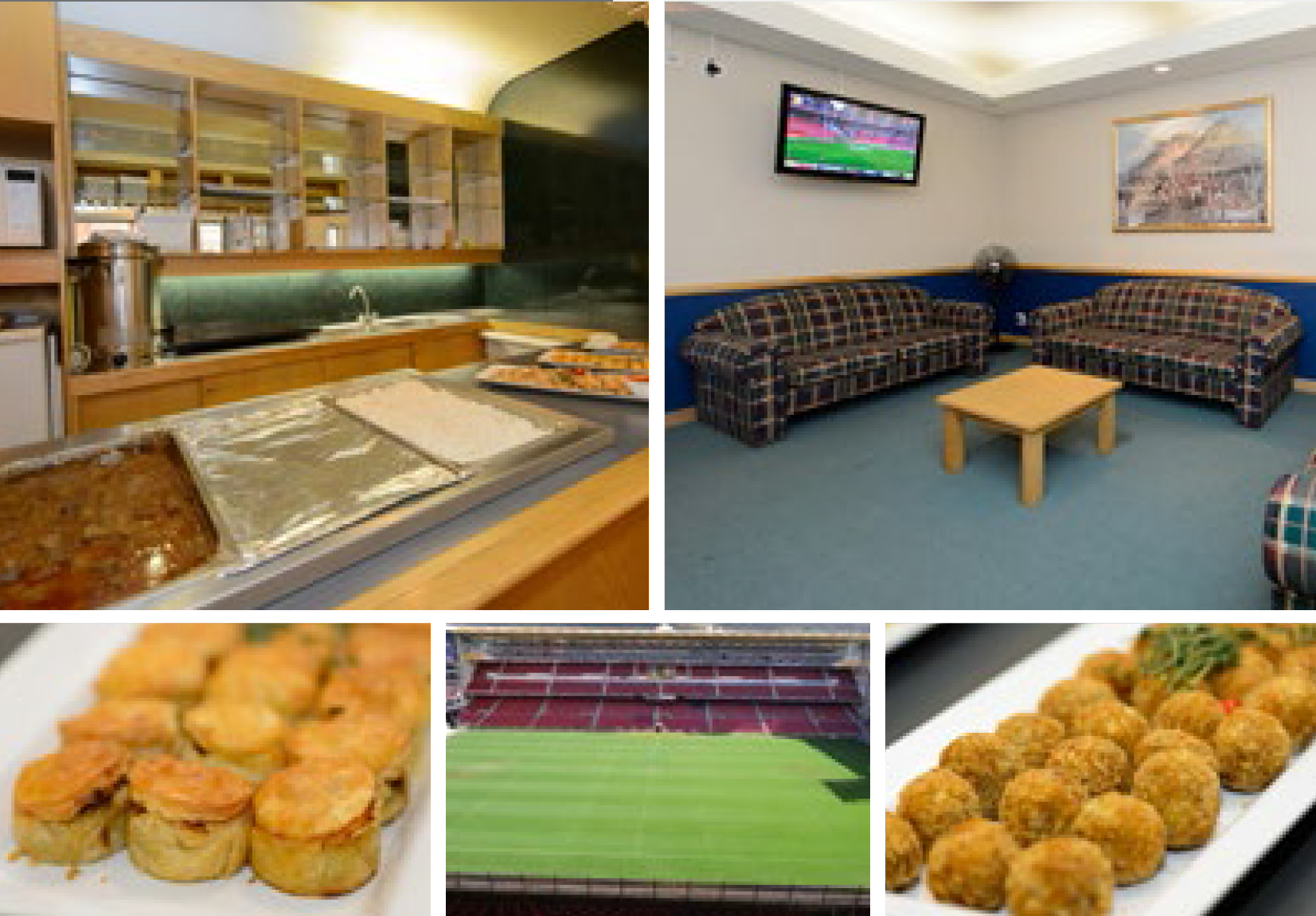 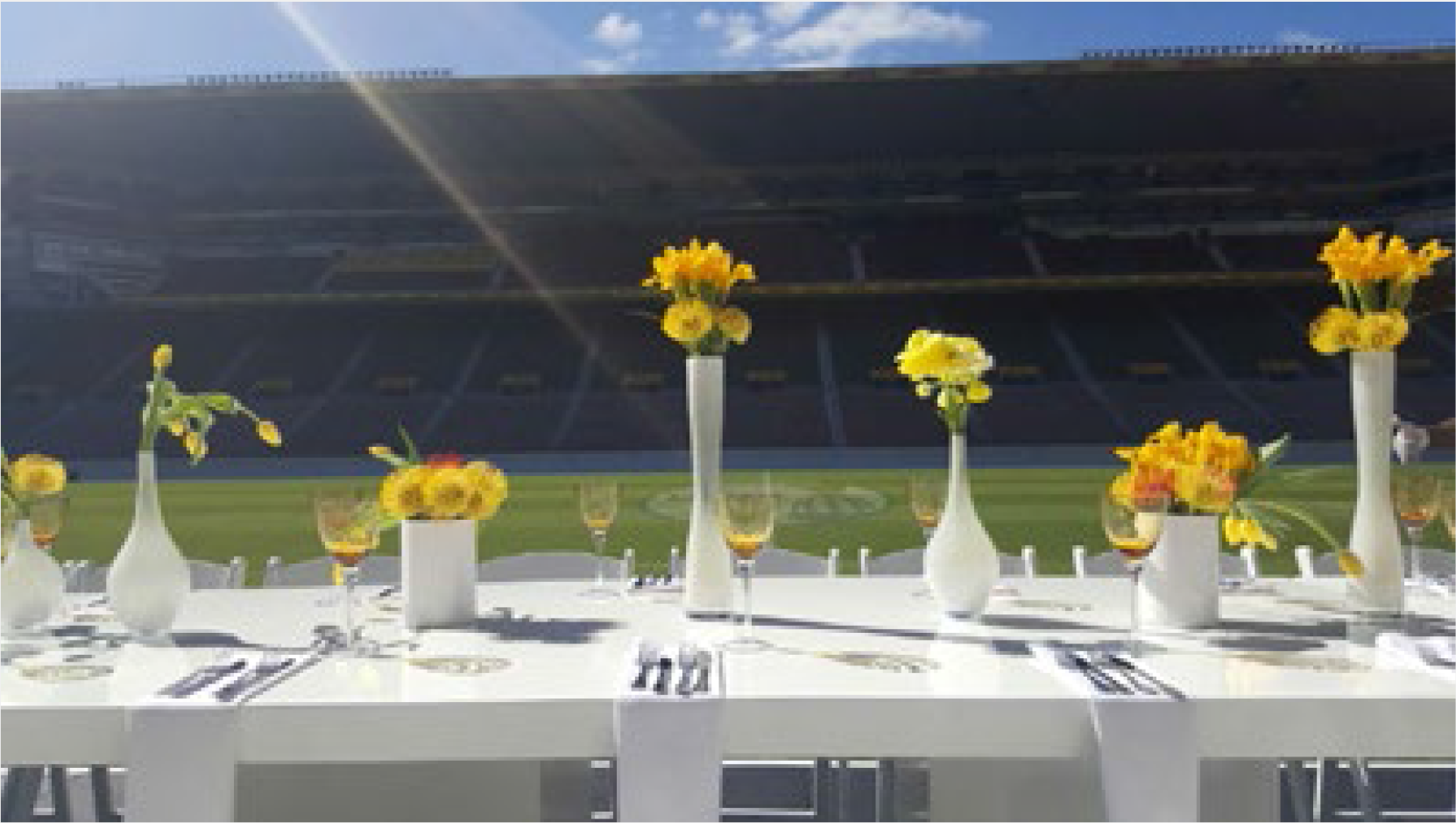 Is venue wheelchair friendly?
Wheelchair access is available on the Grand Stand Ramp Seating. Special arrangements must be made with Jarrod Thomas on jthomas@wprugby.co.za or on 021 659 4600.

Parking:
To be confirmed

Refreshments:
Full range of refreshments are on sale inside the ground, including alcoholic (over 18’s only) and non-alcoholic beverages.

Are there alcohol-free areas?
To be confirmed

Is smoking allowed?
No, the stadium has been declared a non-smoking facility, in compliance with the requirements of the relevant tobacco legislation. Any and all forms of smoking in any part of the stadium are in contravention of the stadium rules and WP Rugby shall be entitled to refuse admission or readmission to, or to eject from the Stadium or the Ground, any person who does not comply. No smoking is allowed at all in any public areas, suites or any areas of the stadium.

Where to I buy valid tickets for DHL Newlands?

Wheelchair access is available on the Grand Stand Ramp Seating. Special arrangements must be made with Jarrod Thomas on jthomas@wprugby.co.za or on 021 659 4600. 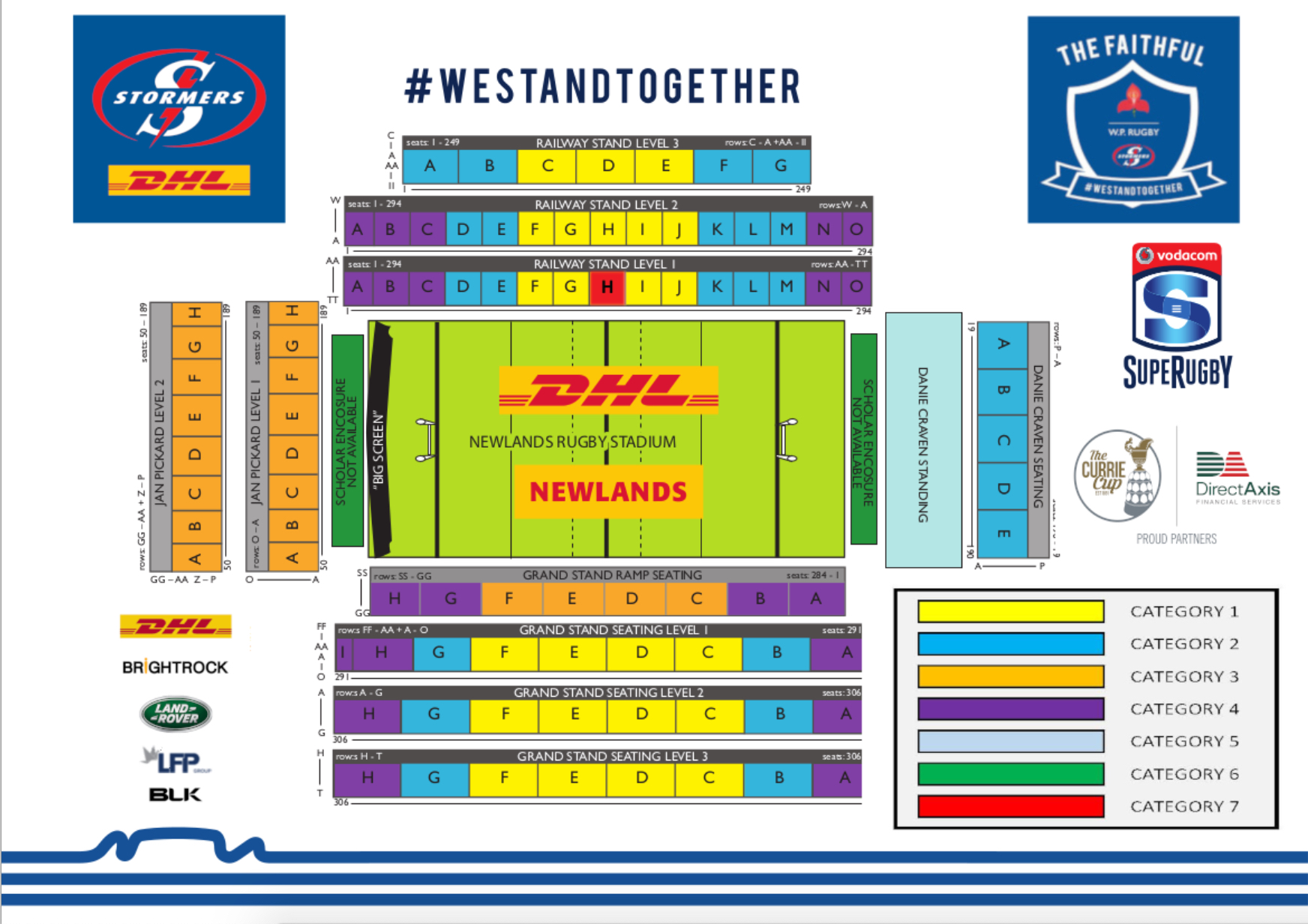 1. Any person who enters the stadium or other property owned or controlled by WP Rugby in the vicinity of the Stadium (together with the Stadium and the car parks “the Ground”) is admitted only on the basis of these Rules and by entering the Ground shall be deemed to have accepted these Rules.

4. All vehicles shall be parked within car parks in accordance with instructions communicated by WP Rugby, its servants or
agents.

5. The construction or use of any type of fire, naked flame barbecue or liquefied petroleum gas device, for cooking or heating, is prohibited within the Ground.

6. In the Stadium no unauthorised person is permitted on the playing or performance area (i.e. the pitch and its surrounding and no person may remain in a gangway, entrance, exit or staircase at any time.

7. Admission to the Stadium is only by the entrance shown on the ticket and cannot be timeously guaranteed if the ticket holder arrives at the Stadium less than 60 minutes before the advertised commencement or kick off time.

8. Only a person specifically authorised in writing by WP Rugby is permitted within the Ground to offer for sale or distribute without charge any item or article whatsoever.

9. Any person entering the Ground must comply with the lawful directions of any steward or other servant or agent of WP Rugby.

11. WP Rugby reserves the right to refuse admission to, or to eject from the Ground, any person who in the reasonable opinion of WP Rugby, its servants or agents, makes or incites any form of racial abuse, chanting, gesturing or behaviour. Where admission is refused in such circumstances, no money will be refunded.

12. Admission to the Stadium may be denied to ticket holders under the influence of, or carrying alcohol or any narcotic substance. Where admission is refused in such circumstances, no money will be refunded.

13. Admission to the Stadium will be denied to ticket holders carrying alcohol or any article, or part of an article, capable of causing injury to a person struck by it, being a bottle, can or other portable container which is for holding any drink, and is of a kind which, when empty, is normally discarded or returned to, or left to be recovered by, the supplier. Where admission is refused in such circumstances, no money will be refunded.

14. Glass bottles, glass receptacles, cans, plastic bottles, pyrotechnics, flags on sticks or poles which stick or pole measures more than 1.5 metres in length, or any other item which, in the reasonable opinion of WP Rugby, its servants or agents, could be used as a weapon or cause a nuisance to others, are not allowed within the Stadium. No umbrellas will be allowed into the stadium.

15. Musical instruments are not allowed into the stadium for rugby fixtures.

16. All promotional, commercial, political or religious items of whatever nature, including but not limited to banners, signs, symbols and leaflets are prohibited and may not be brought into the stadium unless authorised by WP Rugby.

17. All persons including children and babies require a valid event ticket.

18. Pushchairs or prams are not allowed into the seating bowl

19. Except for photography for bona fide private non-commercial uses, the possession or operation of recording or transmission
equipment of any kind is prohibited within the Stadium. This includes without limitation photography, filming, audio or other recording or transmission, or the compilation or transmission of data, save with the specific authorisation of WP Rugby, such authorisation is hereby given in respect of photography for bona fide private non-commercial uses unless and until WP Rugby notifies otherwise. Private fixed lens cameras will be allowed in the stadium providing they are not equipped with a lens of such a size that it may cause a nuisance to other spectators. Video cameras are not permitted.

20. No person is permitted to throw any object or projectile within the Ground.

21. Climbing onto or into stands, buildings, fences, structures or fittings within the Ground is prohibited.

22. Subject to WP Rugby or its agents obtaining a valid liquor licence for the event, the in-stadium purchase of and consumption of 2 beers is allowed on the public stands. The following areas are however excluded from this ruling and are designated alcohol free or dry areas, with no alcohol consumption allowed on the public area stands – the scholars areas on the North and south ends of the ground and the public seating area in the Pickard Stand (North Stand) are designated alcohol free or dry areas for all games.

23. Drinks purchased in the Ground must not be taken out of the Ground.

24. Animals or other livestock are not allowed into the Ground save with the specific authorisation of WP Rugby.

25. The stadium is a non-smoking facility. No smoking of any kind is allowed in any part of the stadium at all. This includes any and all forms of smoking including but not limited to electronic cigarettes and smoking devices.

26. WP Rugby reserves the right for the Stadium Manager, Event Day Safety Officer, the SAPS, VOC Commander or Disaster Management members as its agent and without prior notice to revoke or vary any of the Rules with immediate effect if this is considered necessary on public safety grounds. Any such revocation or variation of the Rules will be published on the website as soon as practicable.

27. WP Rugby shall be entitled to refuse admission or readmission to, or to eject from the Stadium or the Ground, any person who does not comply with these Rules. Where admission is refused in such circumstances, no money will be refunded.